The Circular Square of Murcia, also known as “round”, it is one of the most important squares in Murcia. This well-known Murcian space is located in the center of the city and the most important avenues of the municipality communicate with it. Nowadays, this square, that as its name indicates, it is circular, you can walk since it is in the center, and around the vehicles circulate.

In the center part, highlight the font, which lights up at night with seemingly colorful jets. But "La Redonda" has not always been presented with this aspect, since it has undergone several renovations to provide it with lighting, sound and reclaim your underground moat. further, now has a lighted pergola and a new children's area.

Origin of the circular square in Murcia 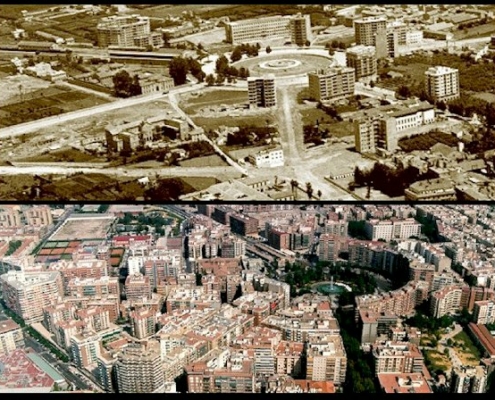 To refer to the origin of this square, one must go back to 1926 and the Cort Plan, which consisted of an extension of the northern part of the Murcian city. Despite numerous attempts to carry out this remodeling, It was not until 1930 its start-up. To communicate the road from Madrid to Alicante, was approved in 1933 a new construction, in addition to a large square located in the vicinity of two important infrastructures that were recently inaugurated such as the Murcia-Zaraiche train station and the so-called Old Prison.

Shortly after, the 1936 a large avenue was made that linked this new square with Santo Domingo and the old town. For this, the old Palace of the Marquises de los Vélez was demolished in order to be carried out. 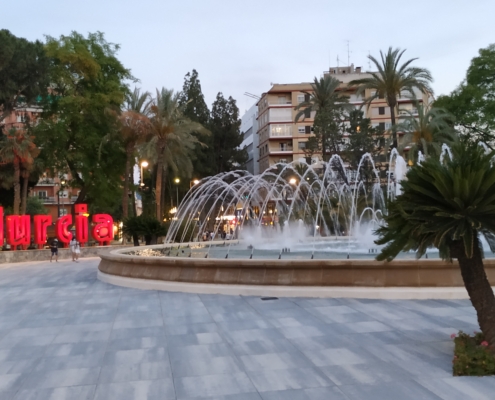 Once the works are finished and the communication between the Plaza Circular and the Gran Vía Alfonso X is put into operation, in 1950 the first buildings began to be built around it, that at that time there were only the two inaugurations mentioned above, the Old Prison and the Murcia-Zaraiche station.

Already at the time of the 60, the then Plaza del Generalissimo, the project of erecting a large light source was implemented, as well as remodeling the entire plaza. It consisted of landscaping the area with grass and trees that would provide shade for the new benches and thus enjoy the brand-new remodeled plaza..

A) Yes, with the walnut children's play area and the rest of the reforms the square was reopened in 1970. At this time, the sporting achievements of the city's main team were already beginning to be celebrated., the Real Murcia Soccer Club and the Spanish National Team and it has already become known as "La Redonda", for its circular appearance.

Between 2006 Y 2007, the fountain was completely remodeled and repaired, since it suffered from leaks. Thus, It was equipped with new facilities and machinery, of lights and music. The outer water ring was dispensed with and said ring was unified with the existing grass ring., being in this case artificial grass. The 30 March 2007 it was reopened.

News of the Plaza Circular

The historic fountain of the Plaza Circular, I had been presenting various problems, like very worn railing and perimeter grass, the perimeter wall of dirty and deteriorated natural stone, the light piano out of order and corrosion and cracks in the floor of the machinery pit and old cistern.

The Circular Square of Murcia (popularly known as the Round) premiered an illuminated pergola of almost 1.000 m2, a new children's area of 250 m2 and a flooring with a unique design, of blue tones. further, of a three-meter-high sculpture with letters that will reproduce the word ‘Murcia’. Thus, The Murcian city is the main protagonist since its residents and tourists are the great beneficiaries of large pedestrian areas.

A good way to visit this new Circular square is to make a stop along the way in Casilla, Murcian town where the restaurant Abrasador Canovas, a very spacious restaurant, several lounges and also with area Tapeo. More of 36 years of experience of family Canovas, make it a safe bet for good meat and traditional dishes of the Murcian cuisine. 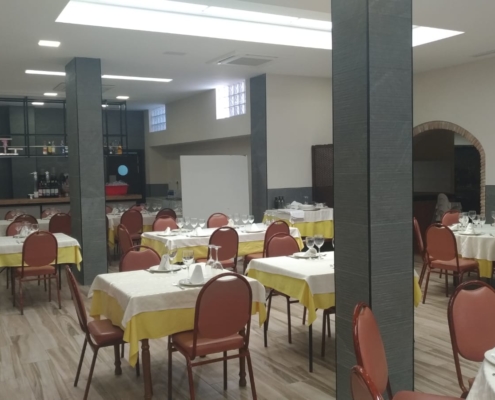 How is our kitchen
Scroll to top
This site uses cookies to improve your experience. If you continue browsing we understand you accept its useTo accept Plus
Use of cookies