If you need to book we recommend you do it through the button “digital book” or the reservation call center. And if you want information you can check restaurant 651 82 89 42 and ask for Jose.

In the center of Consuegra, right in the Plaza de España, Gastro Bar El Pesca is on the corner, and wall to wall, in the nº 1 from the hospital there is direct access to the Canela y Limón Restaurant.

The castle of Consuegra

The most important of La Mancha

Scorching cinnamon and lemon restaurant is located in Consuegra in Toledo. The gastronomic offer is based on a combination of tradition and innovation. An incredible natural environment that now joins gastronomy meat itself rearing Abrasador. Since the founding of Scorching began their first restaurant grilled meats in Toledo, and they dreamed to be associated in the best restaurants in the province of Toledo offering their Iberian pork bait and field Anoja own breeding beef Montes de Toledo. 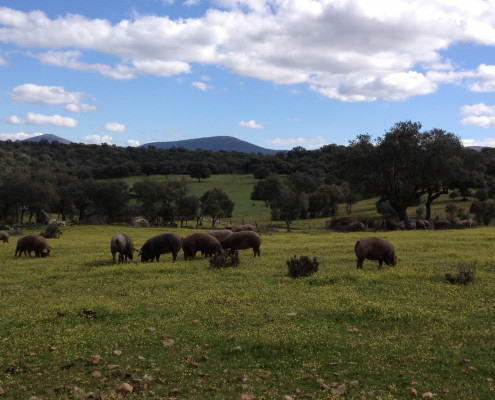 For in Consuegra it is one of the towns of Castilla la Mancha where you can enjoy these grilled meats, livestock coming from the Ramirez family are very close by, Menasalbas, cattle town par excellence. 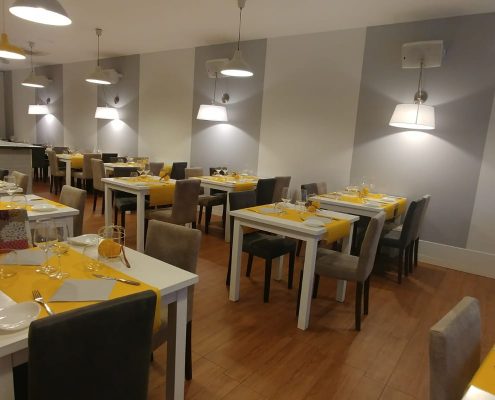 The fact that their grilled meats, Main specialty, It is done in a closed furnace and the absence of oxygen, It allows the meat reaches its peak of flavor and texture, since the pore closes meat and results in a very juicy dish. The grilled meat are a specialty of the house, especially Parillada Abrasador, and their meat dishes among which the Iberian tenderloin Tournedos. Also note that are made with organic coconut shell charcoal, free of dirt and soot, so that meat with a calorific value three times that of oak charcoal are produced without harming the environment, thus achieving a result of texture and great taste.

Tournedos of Iberian loin of cinnamon and lemon 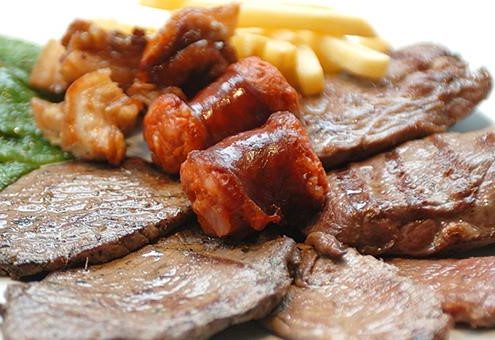 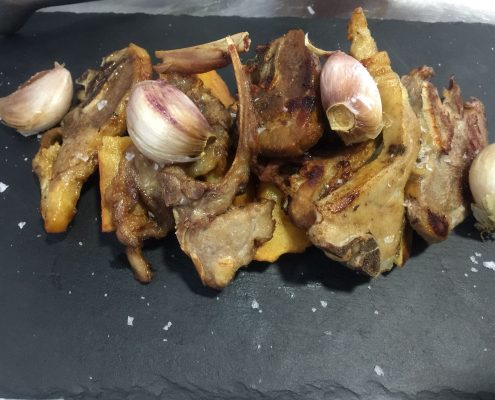 Although their specialty is grilled meat, However, also it offers extraordinary dishes like black rice with squid and aioli Tempura, tuna loin with ratatouille and crispy onion and sublime salmon tartare with soy and capers. 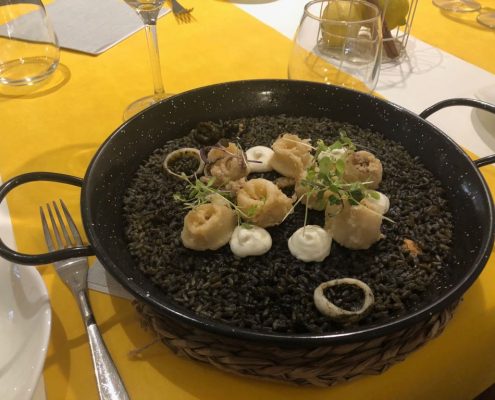 black rice with squid and aioli 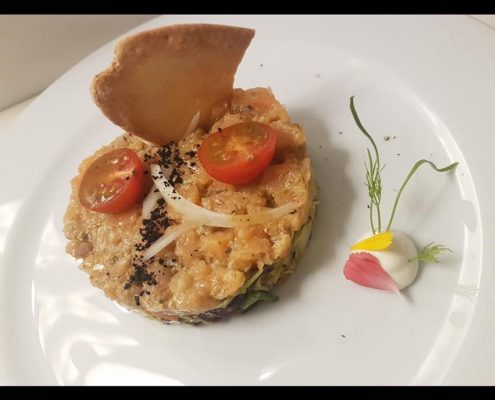 Salmon tartare with soy and capers and lemon Cinnamon Restaurant

History and tradition of the founders

Scorching this restaurant Cinnamon and Lemon, It is located in the center, next to Plaza del Ayuntamiento. It is led by its founders, José (known as José El Pesca) who he is in charge of the room and Mamen, head chef. They opened a few years ago a “Gastro Bar” in the same town square, with a remarkable terrace and a café and beer approach, with a rustic touch that makes it very cozy, known as Bar El Pesca. And two years ago they decided to step forward and open right in the adjacent room this restaurant, they can access directly from the street or also accessed from the same Bar El Pesca.

Meet the team cinnamon and lemon

In one of the most beautiful places of La Mancha, we found a perfect team to please your visit, visit Consuegra and its history must have a stop in Abrasador cinnamon and lemon, these guys will take care to make your visit enjoyable and above all, They make you want to return. They are: David as a kitchen, Mamen as a cook and store manager Jose Antonio and along with Andrea as room charge. 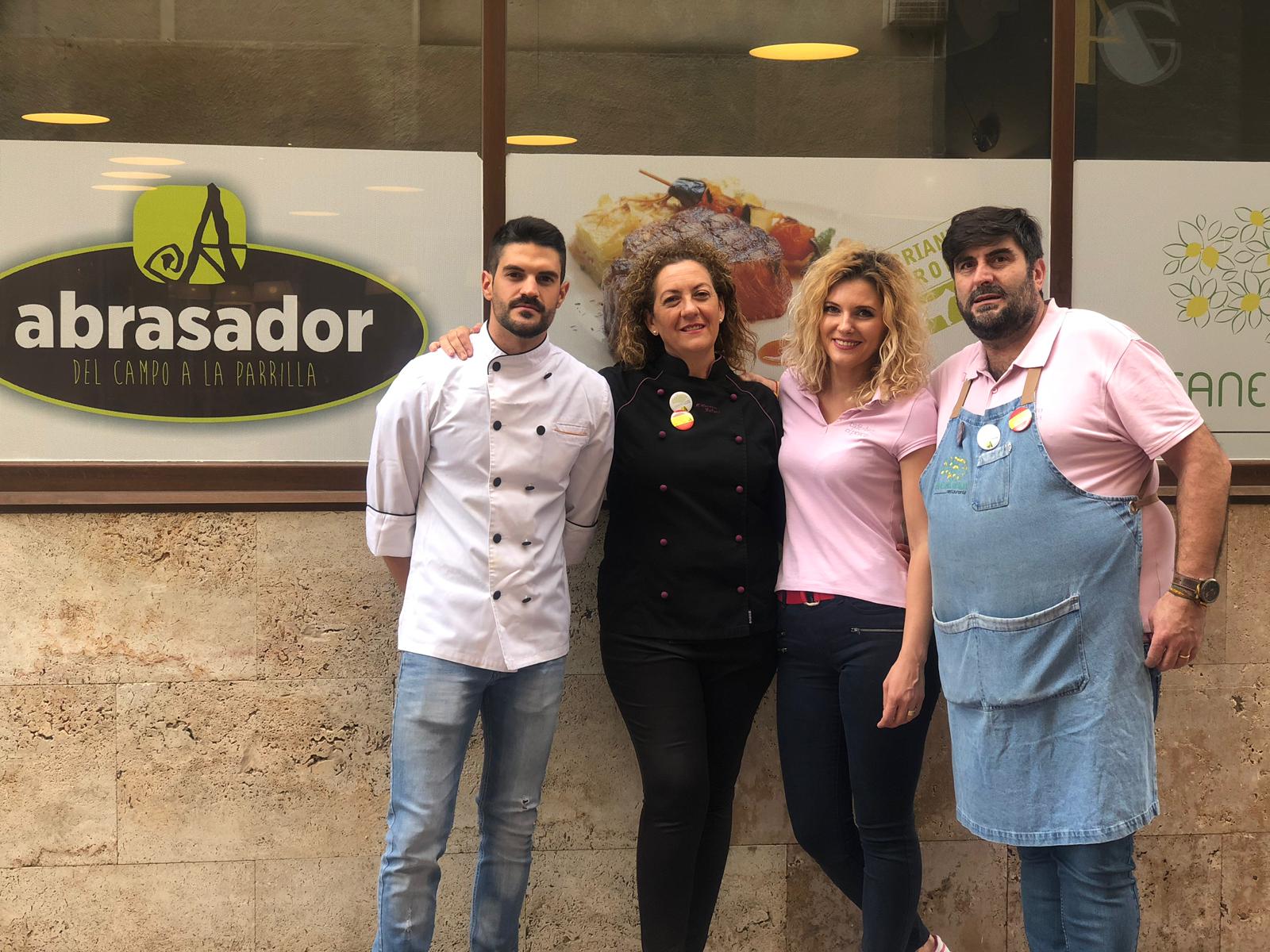 Linkedin
https://abrasador.com/wp-content/uploads/2017/12/logoENFOLD_V2-300x100.jpg 0 0 Burning https://abrasador.com/wp-content/uploads/2017/12/logoENFOLD_V2-300x100.jpg Burning2018-05-15 10:57:442021-10-25 19:49:22Restaurant Scorching cinnamon and lemon
Restaurant Scorching Niagara's Abrasador Finca Embid Restaurant
Scroll to top
This site uses cookies to improve your experience. If you continue browsing we understand you accept its useTo accept Plus
Use of cookies