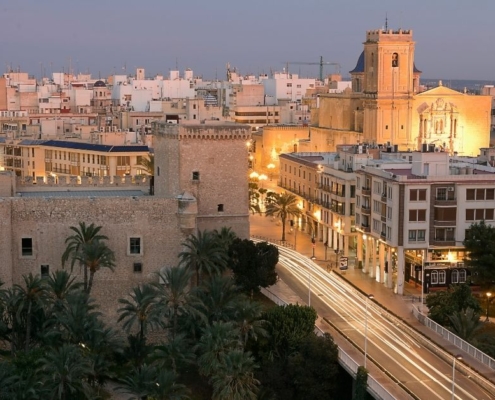 When we mention the city of Elche perhaps the first thought is to mention its universal Lady, palm trees and shoes, in addition to its two World Heritage Sites: El Palmeral and El Misteri or Festa d’Elx.

However, the city of palm trees treasures many more charms such as its numerous and historic buildings as well as traditional festivities such as the Nit de L’Albà or the Coming of the Virgin of the Assumption. 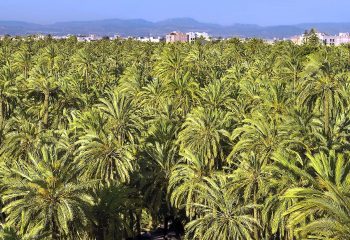 Then, we will highlight some of the unmissable visits in this city in which in addition to the buildings and festivities, an idyllic climate and brilliant gastronomy reign in which it treasures fresh products thanks to its perfect location such as fruits and vegetables, in addition to dream dishes of the local gastronomy such as rice dishes and especially the "rice with crust" so typical in the city. 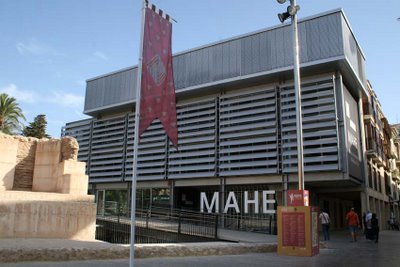 You can choose the first visit between the MAHE and the Basilica of Santa María, because both are par excellence two of the most important buildings in Elche. The Basilica of Santa Maria is located in the heart of the city, in the square that shares its name with the building. Centuries ago it was a mosque, but after the conquest of Jaume I in 1265 and during all this time it has received all kinds of modifications and remodeling, although still improving this excellent historical building. From its bell tower you will have an exceptional view of the city and its palm grove. 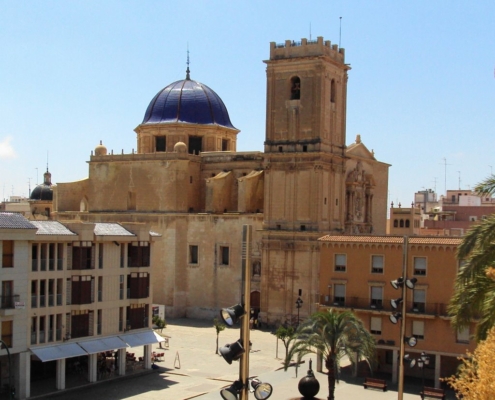 Both in its facade and in its interior we can find the different architectural styles that go from the baroque to the neoclassical. In it the main festival of Elche is celebrated as it is "The Festival or Mystery of Elche", in which it consists of a medieval representation in which Death is recreated, Assumption and Coronation of the Virgin Mary. It should be noted that it is sung and performed by children and non-professional adults, rehearsing throughout the year for this event with so much roots in the city. It is celebrated on 14 Y 15 of August. 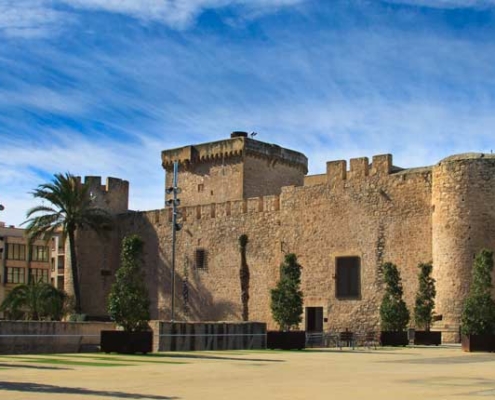 Just behind the Plaza de Santa María, is the Altamira Palace and inside the MAHE (Archaeological and Historical Museum of Elche). Nearby are also the Arab Baths of Elche, which constitute one of the few examples of Islamic public architecture that have been preserved in the Valencian Community to this day.. Located on the ground floor of the old 16th century convent of La Merced or Santa Lucía, que tras su excavación y puesta en valor por parte del Ayuntamiento de Elche, they have become, in an essential part of the historical heritage of Elche.

Meanwhile, The visit to this museum usually lasts about an hour and is a must to remember a trip back in time to the Neolithic era, Aeneolithic, the Bronze Age, the Iberian stage, the process of Romanization, the Visigothic period, the Islamic settlement up to the present day of the archeology of our city. But if you hope to find the famous Lady of Elche, We will tell you that the original is in the National Archaeological Museum in Madrid, and the one you will find in the Elche museum is an exact replica. 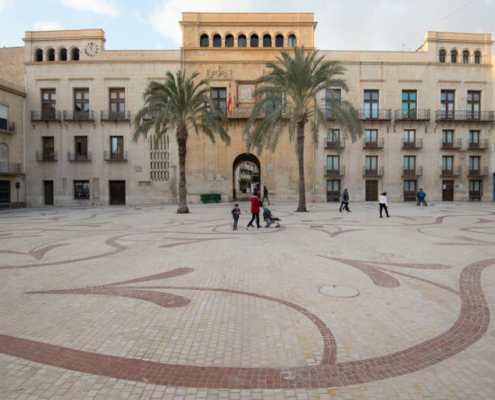 Also in the historic center we can admire the Elche Town Hall building, dating from the 15th century, whose central nucleus is the "Council Tower”Which served as a gateway to the old walled city. It should be noted that until the sixteenth century the inhabitants of Elche could only know the time they lived by the hand-touch that was made on the bells of the hermitage of San Jaime., now defunct. Aquí existían dos personajes muy populares para los ilicitanos como son Calendura y Calendureta. Se trata de dos autómatas encargados de tocar las horas en el campanario del reloj del Ayuntamiento situado en la Torre de la Vetlla o Centinela de la antigua muralla medieval, which they achieve by hitting the bells with their maces. The biggest, Miquel Calendura, hits at rush hour and the other, Vicent Calendureta, the rooms.

From this epoch, the Raval neighborhood has been the one that has endured its essence the most, both through the streets and its beautiful and traditional buildings. In this neighborhood is the Contemporary Museum of Elche. Nowadays, Elche has grown by more neighborhoods, so much so that it has become the nineteenth city in Spain by inhabitants, y la tercera de la Comunidad Valenciana, counting on a census close to the 235.000 population.

Another of the places that you cannot miss when visiting Elche is to enjoy its other World Heritage: The Palm Grove. This authentic treasure is the largest palm grove in all of Europe with more than 200.000 palm trees and is divided between several orchards enjoyed throughout the municipality of Elche. An interesting point to contemplate this beautiful route is the Municipal Park, where you can enjoy its variety of unique palm trees and other vegetation. It is undoubtedly one of the most beautiful and emblematic parks in the heart of the city.

Journey into the history of Elche

This beautiful route can continue through the beautiful Huerto del Cura, a few minutes from the Municipal Park and which is located next to the main hotel in the city that shares its name with this orchard in which there is a charming garden where you can contemplate the Imperial Palm, named after the visit to this garden of Empress Sissi back in 1894 and considered the jewel in the crown of all the palm trees of Elche.

In addition to the aforementioned historical buildings of the city of palms and its different world heritage sites, You can also take advantage of the visit to see other important museums such as the Museum of the Festa or the Museum of Contemporary Art of Elche with high historical value, cultural and social. All these museums and buildings are located in the downtown area and in it is the Vinalopó river with a beautiful slope on which it is drawn by Elche with symbols of the city. Even, you can enjoy sports as there are areas enabled and material to exercise outdoors and thus enjoy the views of the palm grove of Elche. 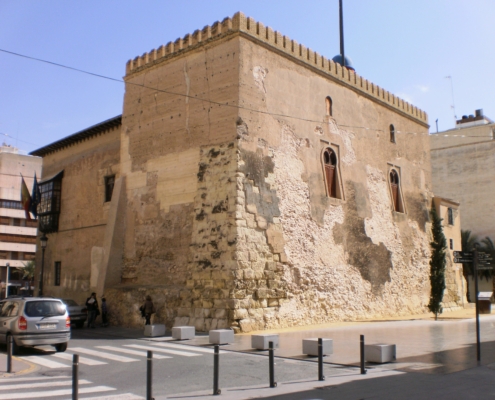 In the center of Elche, next to the Basilica of Santa María, There is also the Torre de la Calahorra. This monument was a construction integrated into the old wall of Elche. This guarded, together with another watchtower the most important door of the walled town, the Lucentina, facing the road to Alicante. Rectangular in shape, has had numerous reforms carried out that have completely modified its structure, both in neo-arabic style windows and the 19th century crenellated brick finish. Inside, in its rooms they house frescoes from the early 20th century with panoramic views of the city, in which the ground floor highlights the Egyptian decoration and Masonic motifs, meeting place of the lodge founded in Elche in 1878.

Already out of town, we find the archaeological site of La Alcudia, famous for being the place of discovery of the Lady of Elche in year 1897. In this site we can see the remains of the ancient Iberian Elche, Roman and Visigothic, until the Arabs moved the city to the location that we know today.

It is worth knowing that a third World Heritage Site is also treasured, the Museum of Puçol, inscribed in the Unesco register of exemplary practices in 2009. This museum complex consists of exhibition halls, storage areas, conservation and restoration workshops, multipurpose room, library and orchard of environmental studies. The visitor who walks through its rooms is transported to times gone by, through reconstructions of everyday scenes of life in the countryside and the contemplation of disused elements such as tartanas, cars, trilladoras, agricultural clothing and utensils. Numerous objects related to the industry are also exhibited, traditional trade, school and leisure, both in rural and urban areas of Elche. 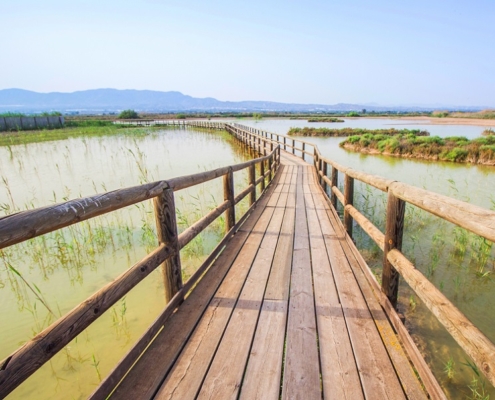 But talking about Elche is also talking about nature, no longer only for its innumerable palm trees, but also for its wetlands, like the Hondo Natural Park, a set of lagoons rich in fauna a flora. Another of the wetlands is the Clot de Galvany, an area protected by biodiversity. 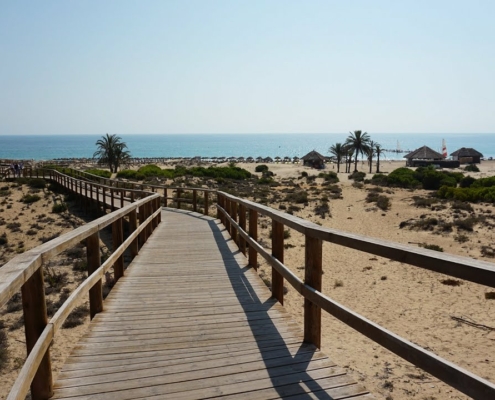 Perhaps what many who do not know is that Elche has a beach, although not in the city if in its vast municipal area. Beaches with a blue flag given the quality of its waters, as El Rebollo-Les Pesqueres, The marine, The Carabassí, Arenales del Sol and El Altet, with crystal clear waters as in the entire Costa Blanca. 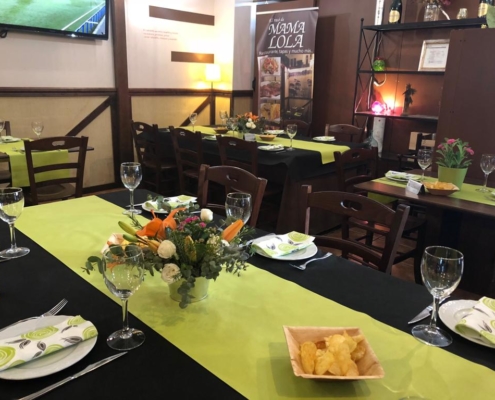 If there is something that stands out in this area of ​​the Valencian Community and specifically in this city is the exquisite gastronomy. They say that one of the best ways to get to know a place is through its food. The delights of elche, Almond hearts or rice with a crust are some of the foods that you cannot miss in this experience, in addition to the Elche cake, fig bread that is typical of this Alicante area. If there is a restaurant that represents quality and professionalism, it is none other than Scorching restaurant El Raco de Mama Lola for its exquisite rice dishes and grilled meats of its own aging that are a reference for the people of Elche.

Linkedin
What to see in Pozuelo de Alarcón and surroundings

History of the Hanging Houses of Cuenca
Scroll to top
This site uses cookies to improve your experience. If you continue browsing we understand you accept its useTo accept Plus
Use of cookies