Castilla-La Macha is perhaps seen as one of the Autonomous Communities with the longest history in Spain. Both for the legacies of the country's many writers and for the many historic buildings and towns that this community treasures.. Cathedrals, plains with vineyards, windmills, Natural spaces of great beauty and endless arguments that will take you to visit Castilla-La Mancha for several days. Then, We detail some of these places that you cannot miss on this trip from La Mancha. 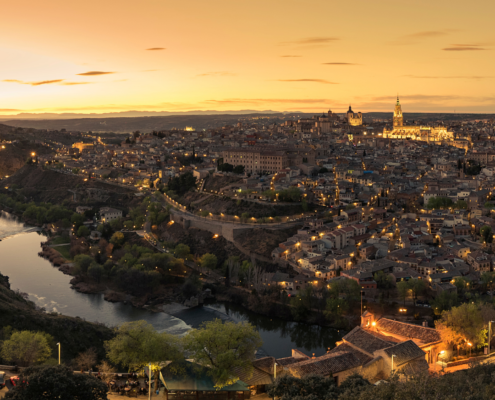 Views of Toledo from the Mirador del Valle

The jewel in the crown of Castilla-La Mancha. The imperial city treasures great monuments full of history, among which we highlight:

Santa Iglesia Catedral Primada (Toledo). Considered the most important building in the entire community, this cathedral is located in the province of the same, Toledo. By its dimensions, Toledo Cathedral is the second largest in Spain, after Seville. It is a Catholic temple of Gothic architecture in Toledo, considered by some as the magnum opus of this style in Spain. Its construction began in 1226 under the reign of Ferdinand III the Holy. It is built with white stone from Olihuelas. 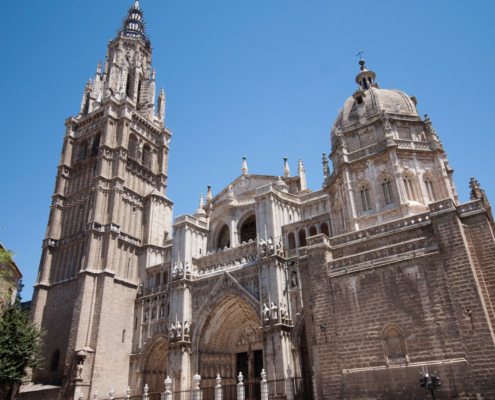 Alcázar (Toledo)In the same city is the Alcázar of Toledo, another of the must-see monuments on your visit to the ancient capital of Spain. This symbolic building, It is located in the highest area of ​​the city, having its most remote origins in Roman times. Located in a strategic point of the city and initially conceived as a great fortress, during the reigns of Alfonso VI and Alfonso X El Sabio, is remade, giving rise to the first square plan fortress with towers at the corners, and main facade of three bodies. 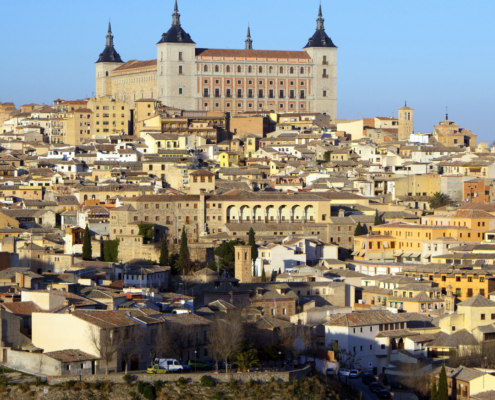 Monastery of San Juan de los Reyes (Toledo). Still in the Toledo city we find the Monastery of San Juan de los Reyes. Many consider it one of the most beautiful Gothic temples in Spain. Conceived as the place where the Catholic Monarchs would be buried, its majesty leaves no one indifferent. It was built under the patronage of Queen Isabel I of Castile with the intention of turning it into a royal mausoleum, commemorating the battle of Toro and the birth of Prince Juan. 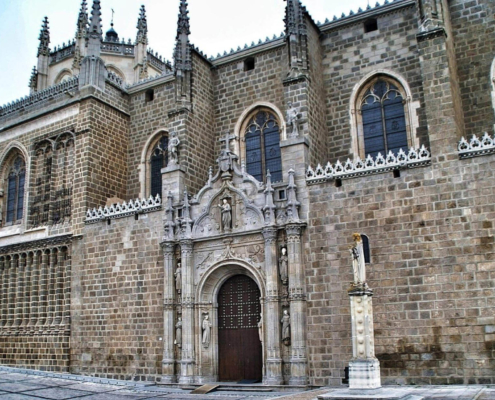 Museo del Greco (Toledo). The museum is the only one in Spain dedicated to the painter, and its purpose is to make understandable and contextualize its figure in the Toledo of the seventeenth. Doménico Theotocópoli, considered the first great genius of Spanish painting, He was a myth already in life and his work has marked the universal History of painting. The famous painter born in Crete but who produced most of his work in the Toledo city. The institution, which opened in 1911 to collect works by the Cretan artist, It is a recreation of the one that the painter used to work. It should be noted that this museum attached to the Ministry of Culture and Sports,Is exclusively managed by the General Directorate of Fine Arts. 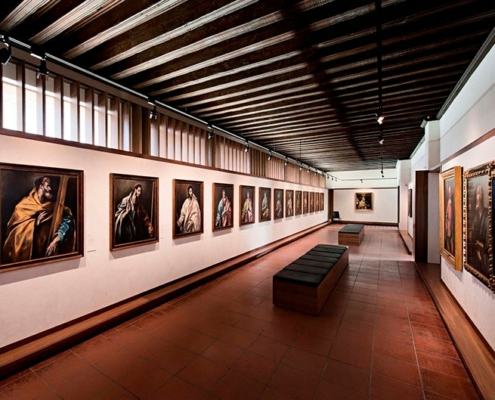 Synagogue of Santa María La Blanca (Toledo). Finally, what to see in Toledo building we visit the Synagogue of Santa María La Blanca. This temple was built in the 1180 like synagogue and, having functioned as such for 211 years, was expropriated and transformed into a church as a result of the pogrom of 1391. Today the building belongs to the Catholic Church, but there is no worship in it. Its architectural elements include smooth white walls made of brick, octagonal pillars with tiled baseboards, geometric decoration on the friezes and vegetal decoration on the capitals of the pillars. All these characteristics and the distribution of the spaces, with its naves formed by the succession of horseshoe arches supported by pillars, they tend to recall the typical typology of a mosque. 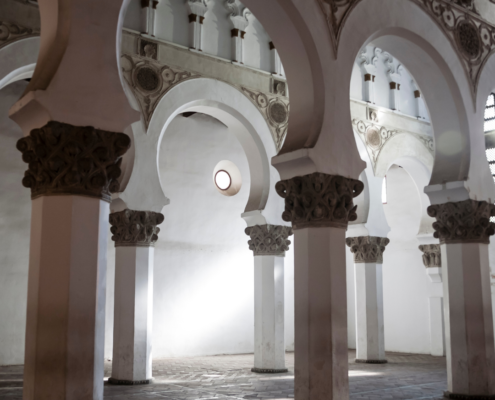 But in this province there are also another series of towns and cities worth visiting, such as Talavera de la Reina or Consuegra with its famous castle and La Mancha-style windmills.

Churches and Cathedral of Santa María del Prado (Real city). During the walk through the center of Ciudad Real, the highlight you will find are its three gothic churches, among which that of San Pedro is the most prominent. In this city the most important thing is undoubtedly the Cathedral of Santa María del Prado. It is late gothic style, although it also has Renaissance elements, and some, like the cover of Forgiveness, which is late Romanesque style. It was built on a church that had previously, of which only the door of Forgiveness is preserved. 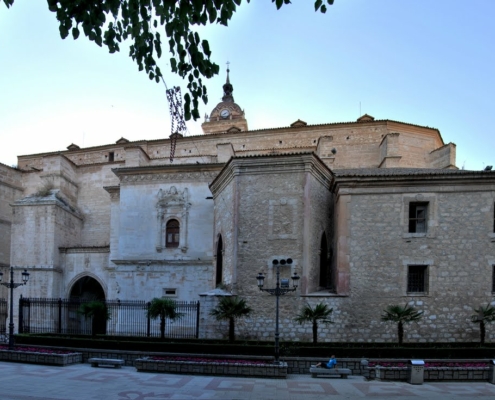 Main Square (Real city). Being an icon for the rest of Spain, the main square of Ciudad Real, has centuries of history, the cattle fairs were held there. The most charismatic and oldest building is the Casa del Arco, belonging to the old city hall of the capital. It is a 15th century building although the façade is later, 18th century. In front of the town hall, over a fountain, we find the statue of Alfonso X the Wise, founder of the city.

Almagro. Near 20 minutes from Ciudad Real we find Almagro. This town is undoubtedly a mandatory stop since it is considered one of the most beautiful towns in Ciudad Real. There are many places that we have to visit in Almagro, from its Plaza Mayor, his Corral de Comedias, the Fúcares Warehouse, or one of its many convents and churches. 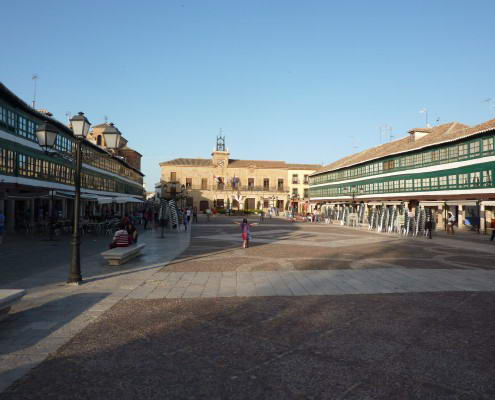 Nature to fall in love

Tablas de Daimiel National Park. This wetland located between the municipalities of Daimiel and Villarrubia de los Ojo and was declared a National Park, Biosphere Reserve and included within the Ramsar Convention. It is the last representative of the ecosystem called river tables, once characteristic of the central plain of our Peninsula. It is a complex ecosystem that mixes the characteristics of a floodplain, produced by the overflows of the Guadiana and Gigüela rivers at their confluence, with that of a groundwater discharge area from a large aquifer. 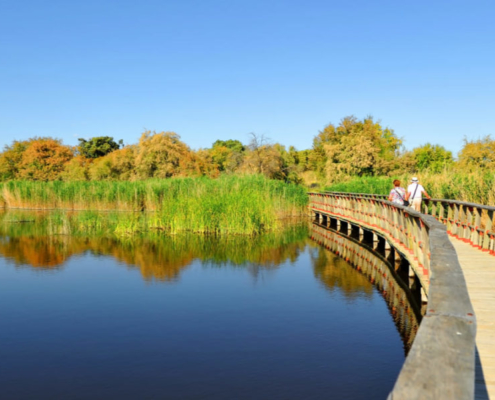 Cabañeros National Park (Real city). Between the provinces of Ciudad Real and Toledo, it is currently one of the most important protected areas in Spain.. The great diversity in fauna and flora make this natural space a jewel of great natural value, being the natural site representative of the Mediterranean mount, within the network of national parks. Some of the most representative species of this National Park, they are the big birds of prey, like the Iberian Imperial Eagle or the Black Stork. 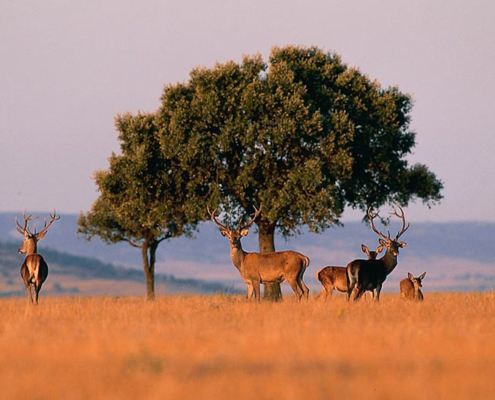 Mills Field Criptana. The Campo de Criptana Windmills have been declared a Site of Cultural Interest, the Infanto Mills, Sardinero and Burleta are in turn declared Monuments of Historical and Artistic Interest. According to Cervantes scholars, it was here in Campo de Criptana where the most popular and well-known adventure of Don Quixote took place., the fight against the giants that turned out to be windmills, Chapter VIII of the first part of Don Quixote. 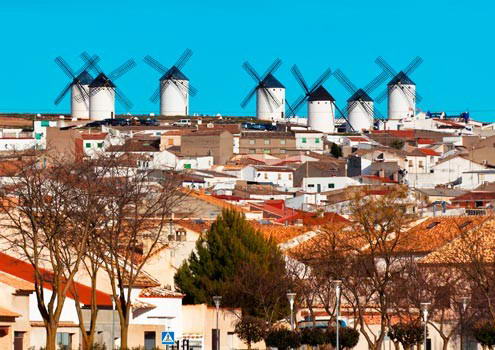 Ruidera. On the way between Albacete and Ciudad Real, for many, a jewel in the heart of La Mancha. This place of great beauty with scenic and geological singularities. Definitely, one of the obligatory stops on this trip from La Mancha. The natural park is formed by a set of sixteen backwaters or river lagoons along the Guadiana Viejo valley. Ruidera is one of the most surprising natural places in Spain. 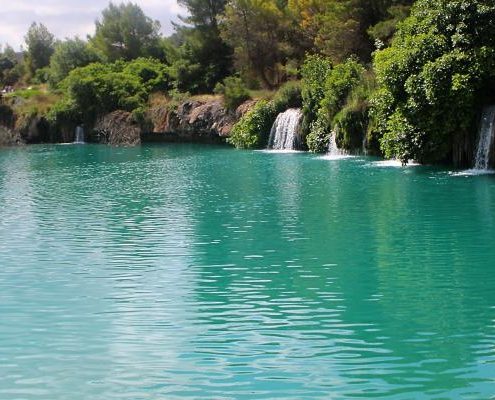 Ruidera, the great attraction of this natural paradise

And if that was not enough, Castilla-La Mancha also includes other provinces such as Albacete, Guadalajara and Cuenca.

Where the capital itself should be highlighted, the largest city in all of Castilla-La Mancha and an important communications hub towards the Spanish east. The highlight of the city would be the "Pasaje Lodares", este es una calle cerrada convirtiéndola en una histórica y monumental galería comercial y residencial ubicada en el centro histórico de la ciudad. There are also other buildings in the city that could stand out for their architecture such as the "Casa Fontecha", the "House of the Gardener", St. John's Cathedral, the Hotel Regina or the fairground of Albacete among others. 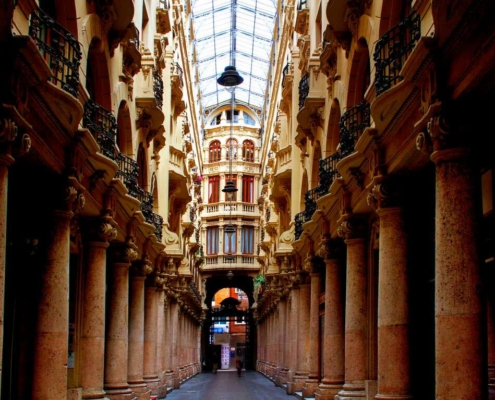 Also noteworthy in the province are towns such as Chinchilla de Montearagón, on top of a hill with medieval layout and declared a Historic Artistic Site, with numerous ecclesiastical and civil buildings of interest.

Here we can find the famous "Hanging Houses" and its beautiful Cathedral in the well-known Plaza Mayor.. Other monuments are also of interest to the visitor such as the "Torre Mangana", the skyscrapers of San Martín, and its innumerable convents and churches. 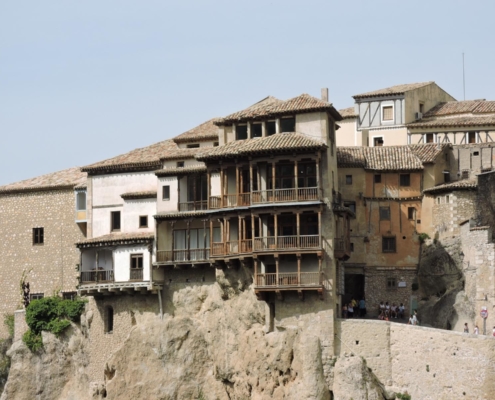 Very close you have "the enchanted city", It is a natural area of ​​calcareous or limestone rock formations. The action of wind and water has given these rocks unique shapes.

Neither can you miss in the visit to the province of Guadalajara to contemplate the beautiful Palace of the Infantado. The Palacio del Infantado has an Elizabethan style and also has a Mudejar trend. Highlights the courtyard of the Lions within this historic and iconic building of the city. Another of the key monuments in Guadalajara is, definitely, The Pantheon of the Duquesa del Sevillano and its construction is recent, 19th century. 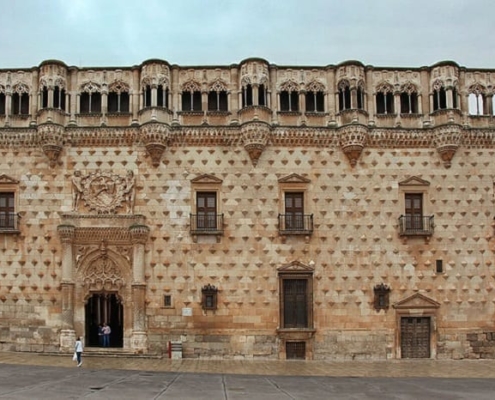 Palace of the Infantado of Guadalajara

These are some of the emblematic places of Castilla-La Mancha, although we will have a lot to visit. further, In the next post we will comment on the most beautiful towns to visit together with its spectacular exquisite gastronomy and a reference in the country. La Mancha is known for its brilliant food and we provide you with some of the restaurants by province where you can enjoy good service and supreme quality.

If you travel to Cuenca you can choose between two restaurant references in the city such as Scorching Finca Embid Y Scorching The Secret of the Cathedral, both located in privileged places. In Toledo, One of the most important cities in the community is Scorching El Capricho de Los Torres, which has a leading chef such as Carlos Torres, Scorching consultant chef and trainer of different kitchens of the group for the other restaurants throughout Spain. In this city there are also other high quality restaurants such as scorching Toledo, Scorching cinnamon and lemon, Scorching The Ambigú Y gastrobar El Pesca.

If you are in the city of Guadalajara you can also enjoy two reference restaurants for the city such as La Duquesa restaurant Y Scorching Loungebar Casino.

Linkedin
How to identify a good black leg ham?

Murcia Cathedral, key in Spanish Baroque
Scroll to top
This site uses cookies to improve your experience. If you continue browsing we understand you accept its useTo accept Plus
Use of cookies