Hemp fiber for industrial use

The first thing we must understand is that the hemp that was planted in this town is for industrial use.. The strain of this hemp is one with a very low level of tetrahydrocannabinol (THC) intended for industrial and food use and although it is often marketed as medicinal, its effect in this aspect is very low, being its true potential as a nutritional supplement, given its high degree of protein and fatty acids.

Callosa is especially proud of its origins as the hemp capital. It was the center of a powerful thread industry, ropes and nets from the Middle Ages. This industry placed Callosa in the modernity of spinning nets and ropes, first with natural fibers and later with its reconversion through the treatment of new materials.

The various world situations and the specialization of calluses, made Callosa de Segura a benchmark for the work and industry of this fiber during the 20th century. 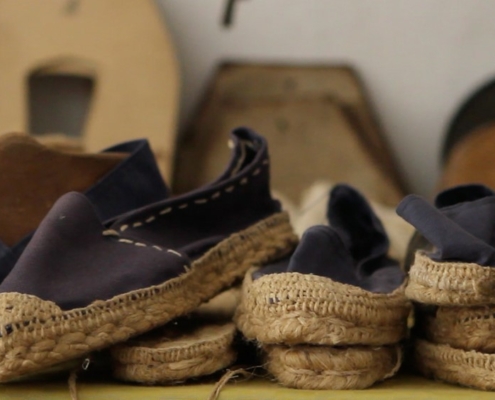 Espadrilles made of hemp

In the sixties, the economic crisis came with the introduction of synthetic fibers, a fact that cut short the promising future of this activity, forcing many calluses to emigrate in search of better job prospects.

A few decades later, Callosa rose from its ashes and intelligently adapted to the times with new factories, heiresses of that artisan-industrial activity, once again occupying the first position in the national production of threads, cabos, synthetic fiber ropes and nets, with modern factories, more machinery and technology and less labor than in the golden age of hemp.

In his time, there was dire consequences of this trade for workers because they are in closed workshops, poorly ventilated, which caused the particles to be aspirated, staying in the airways and lungs, generating "cannabosis", disease that caused a large number of deaths.

Hemp is a herbaceous plant that can reach 4 meters high. Its seed is hemp. It is native to Central Asia and in Spain it was introduced by the Arabs from the 8th century..

Hemp is one of the oldest fibers used by man due to its length, endurance, duration, and for the number of uses it has: ropes, footwear, paper, medicine,…

Hemp seeds are sown in mid-March and germinate at 4 O 5 days of the first irrigation. In mid-July the plant reaches its fullness and can now be harvested. the reaper protects the arm with which he hugs the garba with an oversleeve to mow «a remano», that is to say, embracing and knocking down the garba with the left arm and mowing with the corvilla at ground level.

The garbas have to be submerged for several days in a raft to cause the woody part of the plant to be easily separated from the fibrous part later.. The raft has 1,50 m deep.

The crimped is an operation that consists of separating the fibrous part from the woody part of the plant rod. The agramadora It is a device made of wood on which a smaller trunk is fitted with a dull blade to break and scrape the rods.. 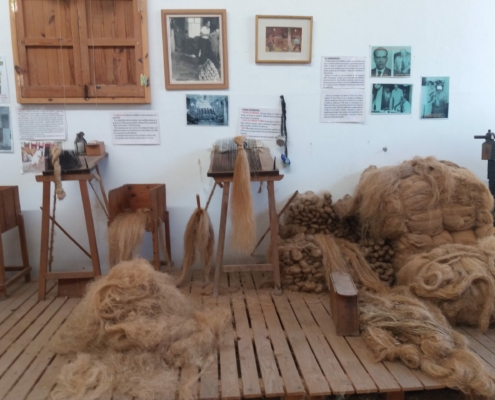 The sworded It is the operation consisting of hitting the agramada garba so that it detaches the last remains of agramizas. The swordsman supports the garba on a vertical piece of wood and hits it with a shovel until it is clean.

The rake, for your part, manually comb the hemp with the rake, rectangular plank with a large curved spike for breaking or cutting off the garbas. Later it goes through the rake which is smaller and serves to review.

It is an interesting ethnological museum that collects everything related to the cultivation and treatment, by craft means and instruments, of the hemp plant and fiber that, in essence, has stayed the same for centuries.

represents a full cycle that allows a review from the planting of the seeds, its care as a plant and its subsequent treatments of the fiber that will allow us to see how it becomes threads, cabos, ropes, networks, shoes, etc., hemp.

We leave you a link to its museum with schedules in case you decide to visit it.

Knowing the history of a city and a town is always interesting, but not less than also knowing its gastronomy, and in Callosa de Segura there is a benchmark Scorching restaurant, to taste the best grilled meats.

Virgen de la Sierra Sanctuary
Scroll to top
This site uses cookies to improve your experience. If you continue browsing we understand you accept its useTo accept Plus
Use of cookies