The Plaza de Toros de Ronda, owned the Royal Cavalry of Ronda, for its history and its architecture it is considered the oldest and monumental Plaza de Toros of Spain. It is not by chance, Ronda is considered one of the cradles of modern bullfighting, emerged in the eighteenth century, in a city where tradition of chivalry was kept very much alive to be a corporation dedicated to the equestrian art is not lost. 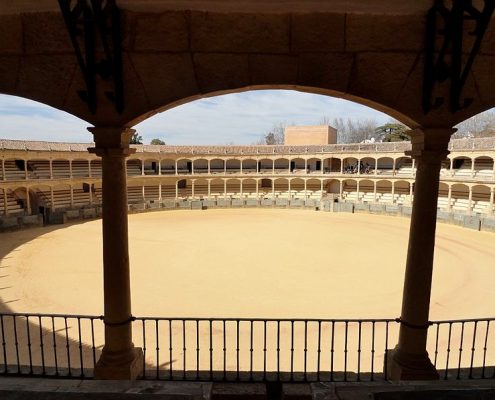 Neoclassic, It is one of the oldest and most beautiful bullrings. Building, of singular beauty, It is attributed to Martin de Aldehuela. It is the third most visited monument in the Autonomous Community of Andalusia. Access the cover is of great architectural interest, with a central balcony forged irons with very fine allusions taurinas, supported by Tuscan columns, with the royal coat of arms in the center. his ring, with 66 mts. diameter, It is the widest in the world. 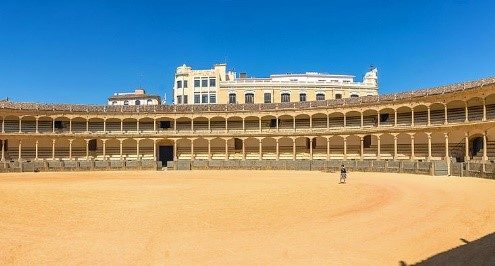 Accommodates 6.000 viewers. On the afternoon of 27 May the year 2000 He hosted the opening of the Bullfighting School of Ronda.

historic bull: The 21 May 1864 you fight in the bullring in Ronda (Málaga) to Marismeño, bull bulls of Dolores Monje, Murube widow. He took the extraordinary number of fifty one sticks, killing four horses; he wanted to spare the life, but for the many wounds he had was impossible. The audience asked, and thus it became, which at the time gave him crawl around the ring playing music in his honor. 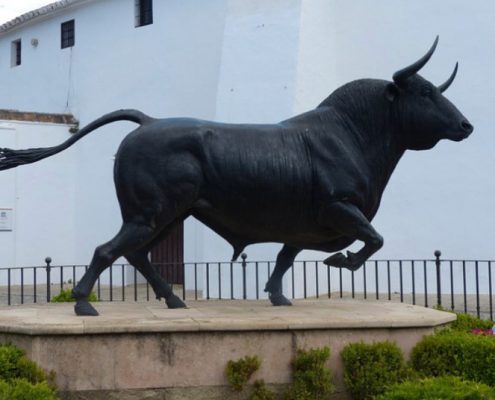 Monument to the bull in the bullring in Ronda

Defense needs of the territory lay the foundations of Philip II made in 1.572 The Royal Cavalry of Ronda, current owner of the arena, necessary for the management of horses kept. To do this body dedicated a space in the city for equestrian exercises, including, as it is traditional in Spain since the Middle Ages skill games included with bulls.

When in the eighteenth century the bullfighters on foot take over from the Knights in games with the bull, the family of Romero comes in Ronda, For three generations brings together the most singular bullfighters of the time. Among them, She stressed about all Pedro Romero (1754-1839), Figure summit and most representative of tauromachy. He retired after more than estoquear 5000 bulls without receiving the slightest scratch. His personality got his job attain social dignity and respect, by bringing value, skill, and aesthetic sense.

The rise of bullfighting led the Royal Cavalry of Ronda to build its famous bullring, work attributed to Martin de Aldehuela, the architect of the great New Bridge over the Tajo de Ronda.

The construction of the plaza lasted six years and was inaugurated in 1785, with a bullfight in which Pedro Romero and Pepe Illo. Conceived in sandstone with a monumental scheme, the nobility of its architectural design, with its double gallery of arcades and the absence of laid bare, gives a spirit over cloister enclosure for bullfighting, reminding the famous circular courtyard of the Palace of Charles V at the Alhambra in Granada. His arena 66 meters in diameter is surrounded by an alley formed by two stone rings. The lines have five rows of bleachers, two story, with 136 forming columns 68 Tuscan columns arches, except for the Palco Real. Covered with gabled Arab tile, the elegance of its interior is unmatched in any other bullring.

In the twentieth century, a second dynasty rondeños bullfigthers, the Ordóñez, Ronda is another contribution to the history of bullfighting. Cayetano Ordóñez and his son Antonio Ordóñez awoke, his way of conceiving the toreo, the interest of such illustrious figures as Ernest Hemingway and Orson Wells.

It was just Antonio Ordóñez who in 1954 He created the world famous run Goya, where exorno and clothing take us back to the time of the painter Goya.

Inside the Plaza de Toros de Ronda you can visit the Museum of Bullfighting, Saddlery the Royal House Collection Orleans and antique firearms.

race of Round Goyescas 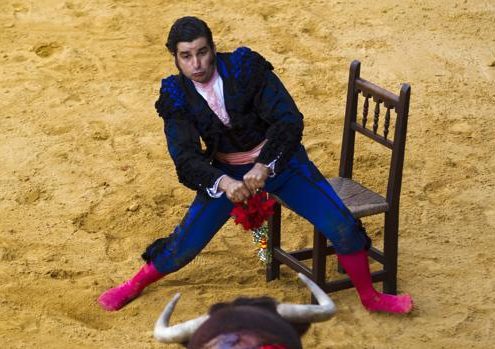 The race of Round Goyescas is composed of bullfighters, Banderilleros and picadores, all dressed in costumes Goyesque, a garment Madrid emerged in the eighteenth century and used until the nineteenth century by the bourgeoisie, later, extend its use to other Spain.

The first race of Round Goyescas was held with the second centenary of the birth of the bullfighter Pedro Romero Year 1954 and influence of Cayetano Ordóñez in the bullring in Ronda, owned by the Royal Cavalry of Ronda.

At present, They held during the first days of September framed in the Fair of Pedro Romero de Ronda next to a bullfight with picks and another run shank, as well as the traditional Contest Exhibition Ronda Latches. Francisco Rivera Ordonez performs work for this third stage entrepreneur.

Must stop to eat in Restuarante La Carreta Ronda for their specialties meat grilled Iberian pork bait field and veal Anoja own parenting. further, between his specialties rondeñas highlights crumbs and oxtail.

Linkedin
Toledo bridges, an architectural path to the past

How to choose the point of meat to your liking without go wrong
Scroll to top
This site uses cookies to improve your experience. If you continue browsing we understand you accept its useTo accept Plus
Use of cookies