Visiting Ronda means knowing the heart of the province of Malaga and rediscovering the past of Andalusia through its Arab baths, palaces or bridges with a lot of history. In fact, Talk to primitive caves where you can contemplate Paleolithic art at Cueva de la Pileta.

Considered one of the towns with the most Andalusian essence, Ronda brings together numerous arguments to visit it and get lost in its streets and draw your imagination into what life was like at that time, contemplating historical monuments from the 18th century such as the Puente Nuevo Ronda., one of the main postcards par excellence of the Malaga town. 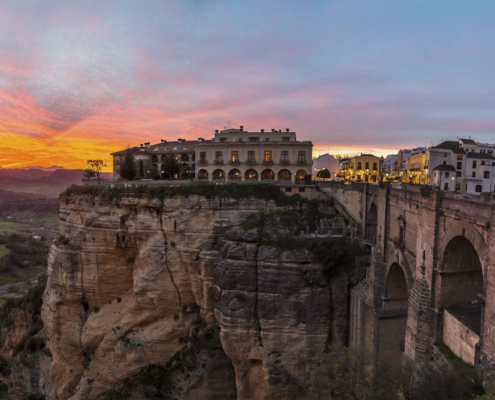 Another perspective of the New Bridge Round

It has become the most emblematic building in the city. The first bridge was built in 1735, However, six years later it collapsed causing the death of 50 people. The second construction occurred in 1751 and inaugurated en1793, highlighting the great work of the architect José Martín de Aldehuela and even 1839 It was considered the highest bridge in the world with a height of 98 meters.

This soul of the city is built of stone masonry and there are two arches on the sides that support the structure that supports the street, fact that it did not have the first construction. As an anecdote, In the upper part are the dependencies of the bridge that were used as a prison in the early days of the bridge and later as an inn. At present it is a center for interpreting the environment.

The design of the bridge consisted of solidifying the ravine on which it sits in order to build an arch of 15 meters. The stone was obtained from the same Tajo de Ronda (It is the gorge on which Ronda sits, and through which the Guadalevín river runs) and izó 100 vertical meters. The height of the Tajo de Ronda is that of a building of 30 plants and the walls that serve as the starting point for the central arch have the same dimensions as the Giralda in Seville.

Cavalry in the bullring of Ronda (Málaga)

Next to the Puente Nuevo de Ronda, it becomes the other emblematic monument of the city. The Real Maestranza de Caballería de Ronda is one of the most important and oldest bullrings in Spain. It was inaugurated in the year 1785 and the "Goyesque bullfight" became popular., in which the costumes of lights are replaced by other typical ones from the 18th century. Currently only one event is held per year: the Goyesca Fair (in September). It was declared as Asset of Cultural Interest in its category of Monument and was also designed by the same architect who finalized the design of the Puente Nuevo de Ronda, Martin de Aldehuela. 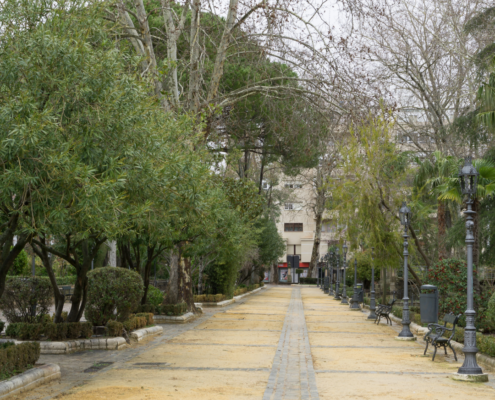 Known in the past as Alameda de San Caros, it is a walk full of wooded nature and a botanical garden that was built in the early 19th century. Don't forget to visit El Balcón del Coño, which receives its name for its short and intense description when looking out over it and contemplating the views of the viewpoint. Before we will go through the Plaza de la Merced where the Church of Our Lady of Mercy is located, which was built in the 16th century..

further, during this beautiful walk, ending the Alameda del Tajo park we will find the Paseo de los Ingleses located on the cliffs where the aforementioned vertigo balconies are located. 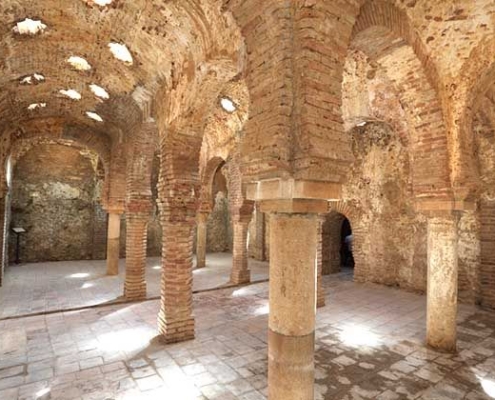 The Arab Baths are from the Nasrid period between the 13th and 14th centuries. The recent excavations carried out so far have made it possible to rescue the three bathrooms (cold, warm and hot) and the vaulted roofs that are connected by semicircular arches. They are conserved, also, part of boilers and water supply systems.

They have the uniqueness of keeping their entire structure, with the different rooms and facilities that organized it, being the largest and best preserved in the Iberian Peninsula.

The House of the Moorish King 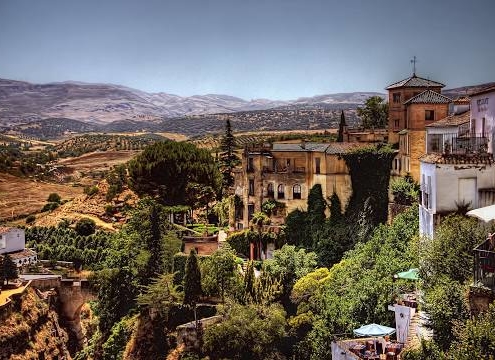 The House of the Moorish King

The Casa del Rey Moro de Ronda brings together several monuments that are composed of three parts: a Muslim era water mine, a neo-Mudejar style house and a garden designed by Jean Claude Nicolas Forestier declared a Site of Cultural Interest 1943. It has a full extension of almost 4.000 m². The complex is elevated on the escarpment of the pit in the north of the ancient Muslim city, right at the opposite end of the Puerta de Almocábar and the old Alcázar. Currently the mine and the garden are open to the public for their visit. 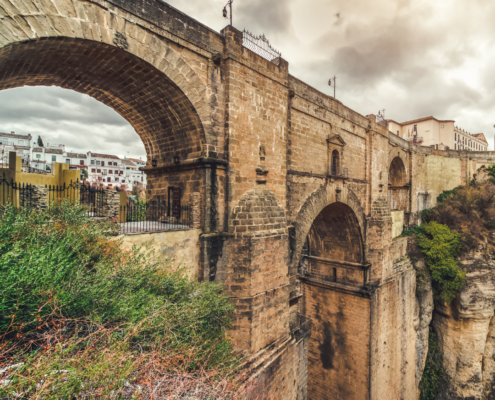 The bridge is of an arch of 31 elevation meters above river level. Some years ago it was restored, completely transforming the 17th century parapets that prevented the view of the Tagus in the background due to its height and paving it again. Likewise, Four balconies were opened over the river to appreciate from them the natural beauties of the Tagus and the landscape in the background. 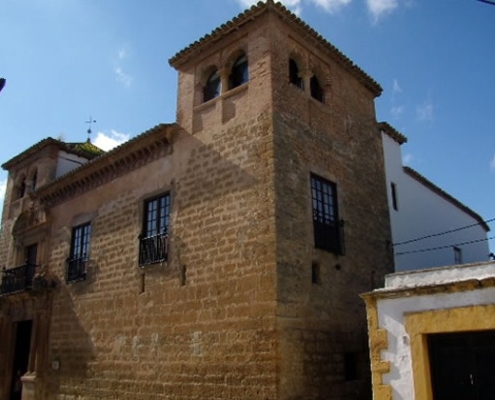 It is undoubtedly the most significant civil monument in Ronda. Legend has it that it was the residence of the great King Abbel Malik, son of the Sultan of Morocco Abul Asan. It is currently the Municipal Museum of Ronda and houses in its facilities a permanent collection that offers a discourse on the history of the region supported by the different archaeological investigations carried out so far in the territory. Also known as the Palace of the Marquis of Villasierra, It is a Mudejar-Renaissance building.

But the city of Ronda, in addition to hosting the living history of Andalusia, also stands out for its great gastronomy. In Ronda you can find quality dishes with a lot of Ronda history and own-aged meats, both yearling veal and Iberian field bait pork in Scorching La Carreta Restaurant. Located in the historic center of the city, it is a restaurant with a varied menu and a formidable service to enjoy your visit to Ronda. 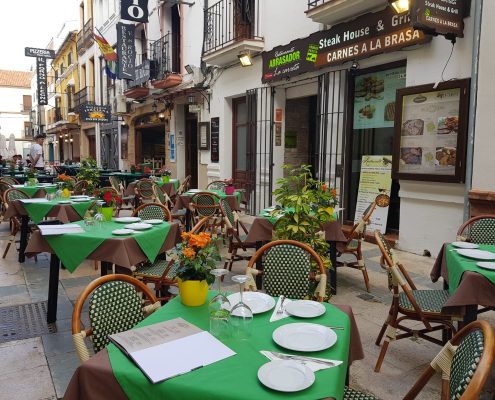 The birth of the brigands in the Malaga town of Ronda in the SXVIII century emerges from the defense of the city against the troops of Napoleon Bonaparte. In fact, near 1400 rondeños joined the troops of Seville and Granada in their fight against the French who were defeated at the Battle of Bailen making Joseph Bonaparte and Napoleon leave Madrid take command of his troops.

After the War of Independence, it is said that there were guerrillas who raided the roads and lived wandering through the woods taking advantage of the innocent and unwary. They became so popular that its image, with its distinctive garb and trebuchets, He was forever linked and Ronda. Sustained war with the French resulted in the destruction of buildings as the Alcázar, the mills, mills and crops, bringing people to a precarious situation hence the grouping saw people and smugglers en route to Gibraltar until the early twentieth century.

The bandolero in the mountains also took on other tasks, It was very united in most cases smuggling en route to Gibraltar and the fans of bullfighting, example we have José María Tempranillo, Juan Caballero, the famous Vivillo, and Jose Ulloa Navarro as "Tragabuches", one of the components of the seven children of Écija who fought against the French troops plus bandit, smuggler and matador, He sang and they say not all bad.

It was the first example of bandolero helping the needy. A kind of Robin Hood born in Utrera and linked to the Andalusian day laborers.

It was one of the most famous members of 'The Seven Children of Ecija', one of the gangs of bandits best known of the nineteenth century Andalucía. His profession was torero, but he left the arena after killing his wife and her lover. After the event, He enlisted in the organized band. Once dissolved the group, his trail was lost. Today you can find references to his life and to other people of the time in the Museo del Bandolero Ronda

He lived an intense but short-lived, leaving a lengthy tour of Andalusian towns, where legends and true facts are mixed. Among these municipalities is Alameda, the town where he was treacherously murdered at the hands of another bandit, "The Barberillo", I had always shown a certain envy for him and where their mortal remains. In his later years, He went from being an outlaw to be under the command of Fernando VII to pursue other brigands. In addition to what is now his grave, in the courtyard of the Church of the Immaculate, you can visit the rural hotel that bears his name, where you can find some documents related to his life. Already in Cordovan lands you can be visited in connection with this and other malefactors of the time the Museum of Banditry, lucentina located in the hamlet of Jauja, where Tempranillo born.

In the Serrania de Ronda they lived most of brigands, but many came from different parts of the Andalusian and national geography. Bandolero Museum is an attraction in the capital of the Tajo. Entertaining way explains the history of banditry in Spain, especially, In Andalucia. It shows a romantic journey from the beginnings of banditry social problem that led.

The museum is structured around five rooms. All make a journey to meet the bandits through original images, historical documents, as baptismal, death certificates, edicts, bonds or seals. objects of the time such as coins also preserved, trabucos, knives or guns. A character, the highwayman, to know a whole period of our history.

Meanwhile history of banditry and visit to the Museo del Bandolero, Scorching interesting visit La Carreta also located in the town of Ronda, specializing in grilled meat Anoja own rearing veal and Iberian pork bait field, as well as local cuisine of the area as rondeñas crumbs or oxtail.