Cuenca Always worth a visit for different reasons before entering the city, it's worth stopping to observe in the distance, because the panoramic view "hanging” on the rocks it is fantastic. From the Convento de San Pablo, Current Parador de Turismo, you can enjoy the view, with the Bridge of San Pablo and flagship Hanging houses challenging heights. The tour of the streets, squares and alleys of the historic center It lets see a large display of palaces, iglesias, convents, towers and buildings of different artistic styles.

stand out, among other sites, Cathedral, the main square, City Hall, Convento de San Pablo, the hanging houses or the famous skyscraper district of San Martin. It should also approach the Hanging Houses to see the important collection of contemporary art that has the Spanish Abstract Art Museum, installed inside. although Hanging houses default are the most significant image of the city, There are other monuments and palaces that are also important and historic for the city of Cuenca. Then, detail some of the most historic buildings in Cuenca.

It is the proper institutional body of the province of Cuenca and the corresponding government and autonomous administration of the municipalities of the province of Cuenca. The Basin Council was created in 1835, as a result of the territorial division of Spain in 1833. It is considered the most important buildings in the province. Holds responsibility for Public Works and Education, and intermediate functions between municipalities and the regional administration and the State. 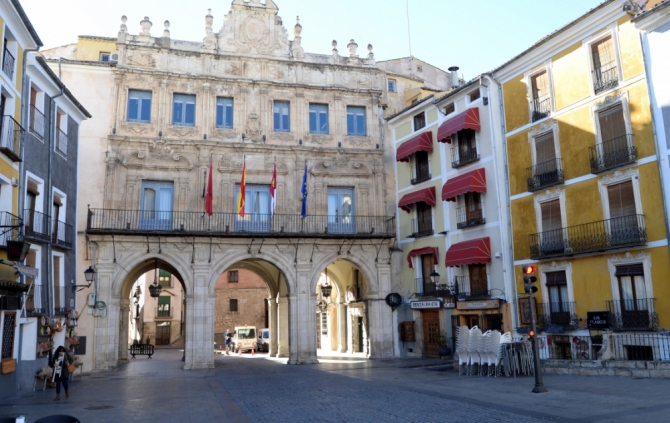 It is located in the main square of the city, the main square (formerly Picota) The town hall of Cuenca is the seat of the city council.  It is one of the most representative buildings of the baroque of Cuenca. It is rectangular, with two bodies on both sides; so marked that, documentation, when it comes to City Hall, It is referring to Town Hall and two homes.

The facade is articulated on three floors, and each is qualified (which they are decreasing as gain height) pilasters of different order. The first floor consists of an open archery, allowing the passage of the main street to the square. On the second floor is a tripartite division, with Ionic pilasters, in this case, They remain on the main floor, in which Bort located the Room of City Hall and its joint offices.

On this floor, three openings open, with a balcony corrido, which they are decorated with baquetones, cajeadas pilasters and pediments curved and broken. In the third flat, the openings are duplicated and, Thus, the rhythm and proportions of architectural elements that compose. Ostensibly minimized, this high floor incorporates the surface of the attic to the design of the facing of the facade, to compensate its imbalance with the piano nobile. 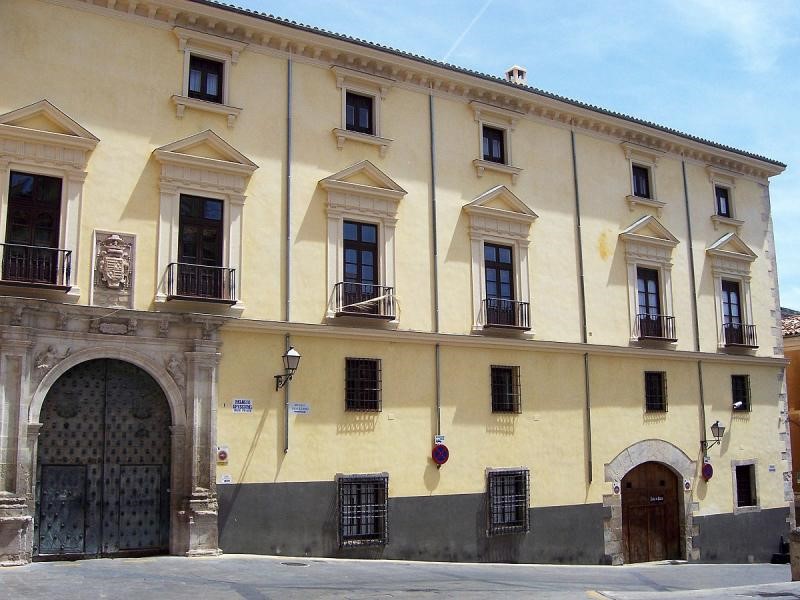 The Episcopal Palace of Cuenca is attached to the cathedral by the south side, on the street Obispo Valero, in the heart of the old city. The palace occupies what once were the houses of the cathedral chapter, and its original building is the thirteenth century, subsequently it expanded in the sixteenth and seventeenth centuries. Of each of these phases are clear samples inside, but its main period is the second, the sixteenth century, from which a magnificent patio is preserved in the cloister. In the gateway you can see the shield of your sponsor, Bishop Flores Osorio. A part of the palace is occupied by the Diocesan Museum of Cuenca Cathedral. 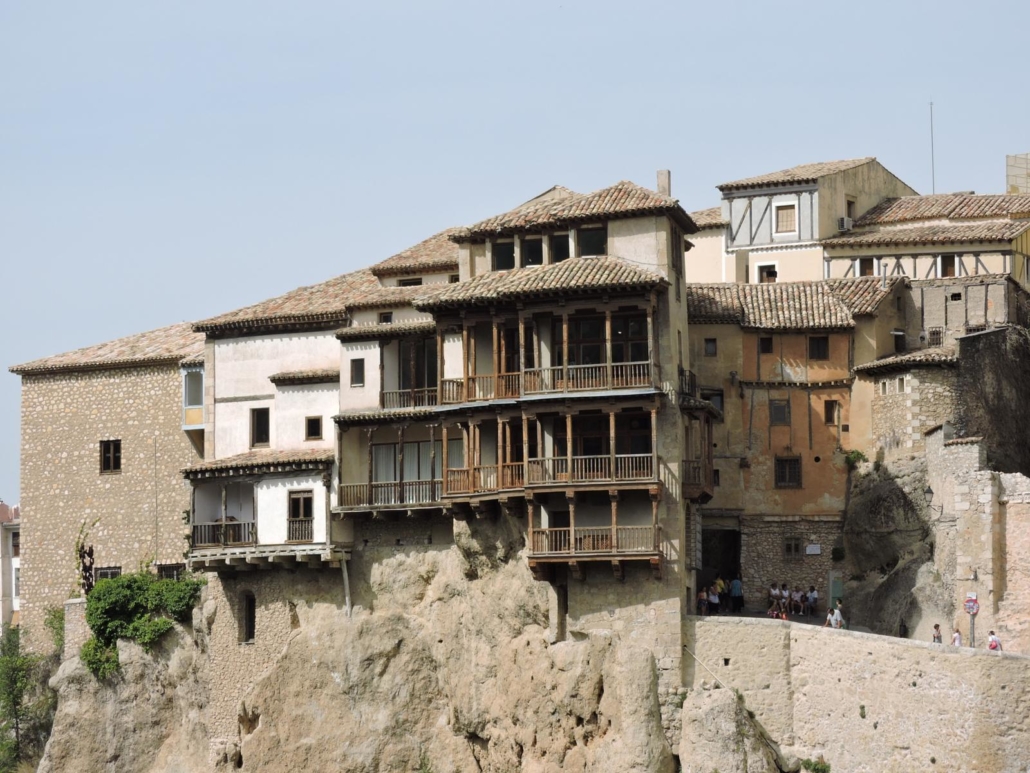 Hanging Houses is Cuenca. His great bulwark. In full Hoz Huécar River, above the road leading to the village of Palomera and just across the Parador de Turismo, like a fairy tale it were, are the Hanging Houses. Its architecture is Gothic, and responds to typical and popular conquenses other constructions standards.

It is a true symbol of the town of Cuenca. Hanging Houses not leave anyone indifferent. In the year 2016 They were declared of cultural interest in the Monument category, more than deserved title. Touch learn more about this conquense icon. Of all these homes they are only three visitable: Sirena's house, which houses an inn where you can taste the tradition, and Casas del Rey, for observing original building elements inside, such as wooden beams and hosting, for everyone's enjoyment, «the most beautiful small museum in the world ": the Museum of Spanish Abstract Art.

Cathedral of Our Lady of Grace 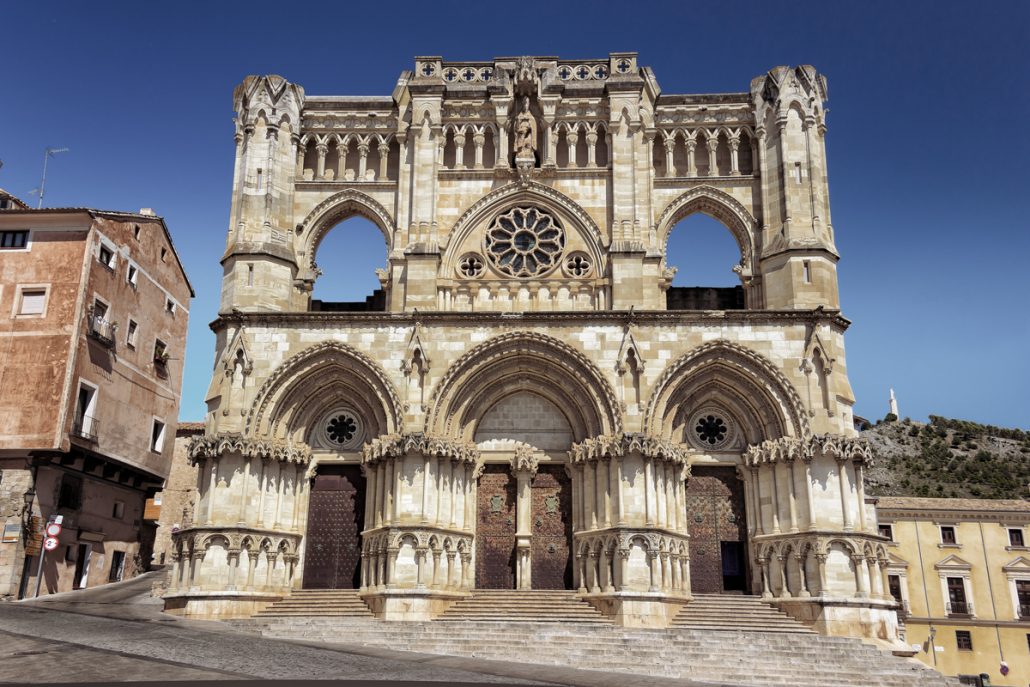 The cathedral is Gothic style with clear French influences. The exterior has lost its Gothic character due to the innovations introduced during the Renaissance. It is Latin cross plan and has a seven-sided polygonal apse. The clerestory is a remnant of the original Norman structure. It is unique in Spain and also, the decoration serves to counteract the thrust of the vaults. The main façade has three doors. The main altar is from Ventura Rodriguez and also has some magnificent bars of the fifteenth century. The doors are the work of chapter houses Berruguete. At the Museum exhibits a Byzantine reliquary.

However, the construction of the cathedral begins in late Romanic, so it is natural that we find Romanesque cathedral resistance against the Gothic news of the moment. The initial plan of the cathedral consisted of three ships; at the height of the cruise it was transformed into five ships and five apses still forming, following the traces of the ruling Romanesque.

In the fifteenth century the five apses were replaced by a double girola to take advantage of the development of the five ships available to the cathedral. Its new plant would be formed by a Latin cross, three ships, double ambulatory and a deep chancel. The cruise is covered by a large central dome influence anglonormanda. The chapels of the aisles were built mostly in the XVI century in Gothic style.

Its exterior was renovated almost entirely in the sixteenth century and in the seventeenth century was built the chapel of the Tabernacle. During the eighteenth century it was reformed both the façade and towers, giving the building a Baroque appearance. This reform affected the main facade was built by King Ferdinand III and had two twin Gothic towers. The towers of the facade along with two other towers cathedral had disappeared during a fire, what gave rise to new reform, who it was born in the year 1720 by Juan Perez and newly reconstructed in 1723 under the direction of Luis Arteaga.

In the twentieth century as a result of damage to the facade, a sinking tower bells in 1902 by lightning strikes, He proceeded to its reconstruction in the year 1910, what is your current appearance, Neo-Gothic style facade work of Vicente Lampérez. Its present appearance confirms without any doubt that it was unfinished.

In the Barrio de San Martin, at Alfonso VIII, these centuries-old buildings are located considerably high, although not enough by one of its aspects. And these buildings, skyscrapers of Cuenca, They have the peculiarity that the height varies depending on the street where we place ourselves. On the facades overlooking the river Huécar, from the street Santa Catalina, we find skyscrapers ten, even says eleven heights. This peculiar vertical architecture is one of the attractions par excellence of Cuenca, fruit of medieval forced adaptation of the construction to the face of the ground. 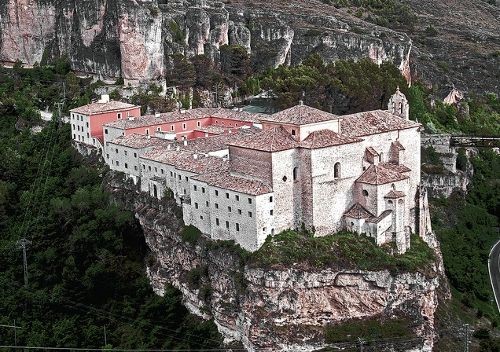 With this tour, a good dining option is Scorching Finca Embid. This brasserie is located inside the Camping Caravaning Cuenca, but with access fully independent. It has a spacious living room and terrace to enjoy fine weather stations. 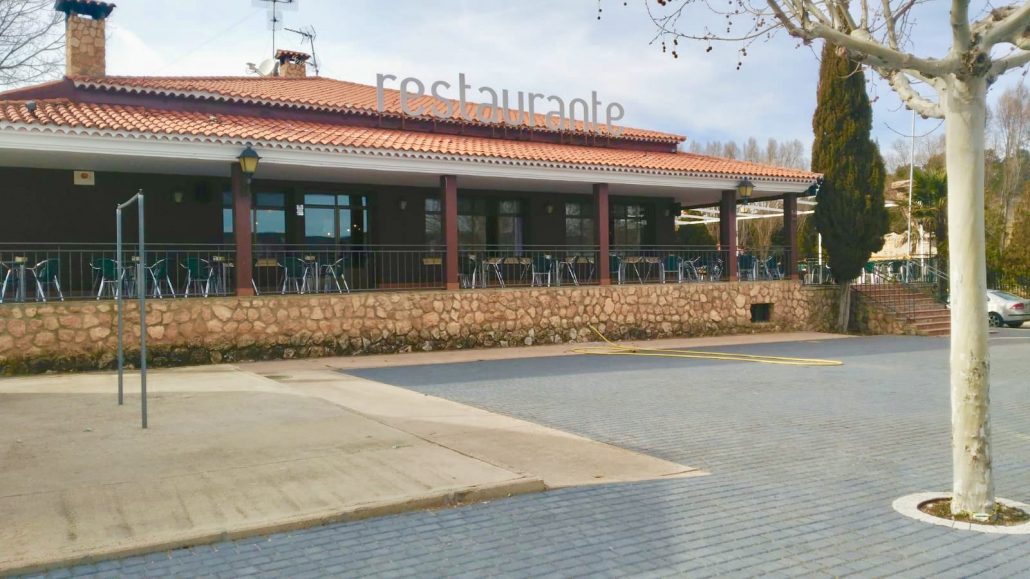 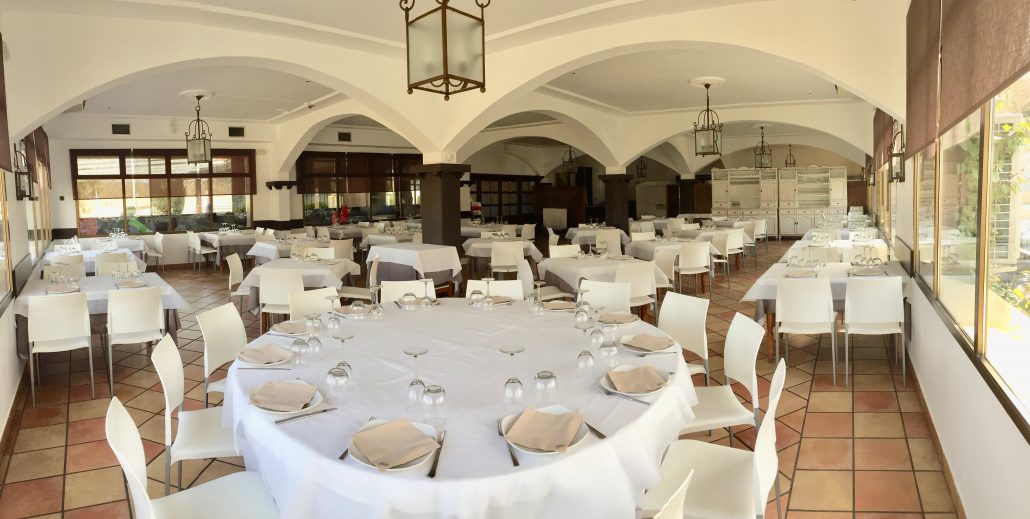 It is known for its specialties in local cuisine and grilled meats, Anoja both beef and Iberian pork bait field. Its location in the countryside and near the city of Cuenca, makes you have a special character where you can enjoy good food.

Linkedin
The best restaurant in Almagro

Traditional dishes from the Vega Baja of the Segura
Scroll to top
This site uses cookies to improve your experience. If you continue browsing we understand you accept its useTo accept Plus
Use of cookies