Cuenca Cathedral is one of the most particular buildings of the Spanish Middle Ages and much has been written about it to explain its presence in these lands Castilla y La Mancha. Cuenca was conquered by Alfonso VIII of Castile in the year 1177. Then, the Mosque was Christianized as usual until the works of an ex-novo temple of Christian typology could be undertaken. It is studied that this must have happened between ten or twenty years later. In 1208 The High Altar had been consecrated so the head must have been completely built by that date. 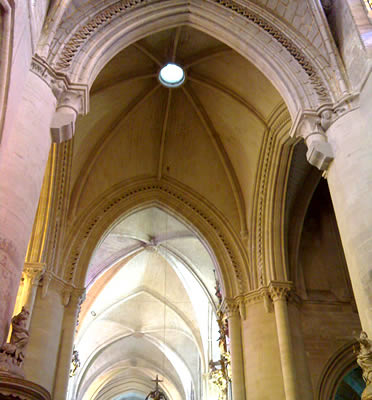 Interior of the Cathedral of Cuenca

The fact is that it is a building that, except for peculiarities and simplifications, can be included in the category of First French Gothic, that is to say, belonging to that current of the twelfth century prior to classical Gothic and which has its best exponents in French cathedrals such as Laon, Soissons and Paris. At the time of starting to build the cathedral, the prevailing style in the Christian kingdoms was still Romanesque, So it should not surprise us that it was the foreigners of the court of King Alfonso VIII who introduced the Gothic airs in our cathedral, since this was the new order prevailing in Europe beyond the Pyrenees. 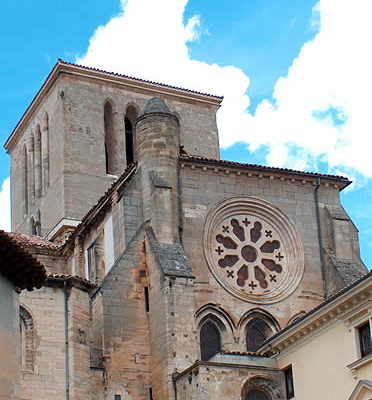 Exterior of the Cathedral 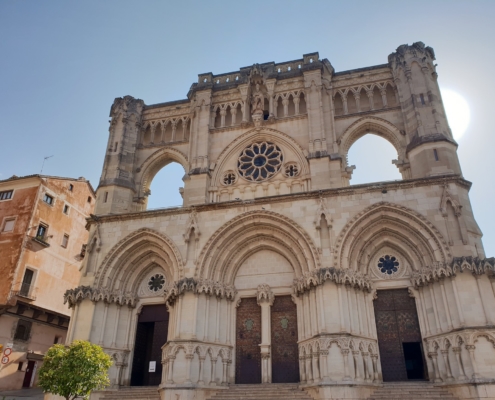 Main Square, next to the Cathedral of Cuenca

It is considered as the first Gothic cathedral made in Castilla, being definitively consecrated under the invocation of Santa María in the year 1208 by Bishop Rodrigo Ximénez de Rada. However, the construction of the cathedral begins in late Romanic, so it is natural that we find Romanesque cathedral resistance against the Gothic news of the moment. The initial plan of the cathedral consisted of three ships; at the height of the cruise it was transformed into five ships and five apses still forming, following the traces of the ruling Romanesque. 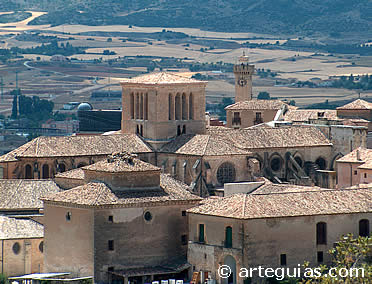 In the fifteenth century the five apses were replaced by a double girola to take advantage of the development of the five ships available to the cathedral. Its new plant would be formed by a Latin cross, three ships, double ambulatory and a deep chancel. The cruise is covered by a large central dome influence anglonormanda.

The chapels of the aisles were built mostly in the XVI century in Gothic style. Its exterior was renovated almost entirely in the sixteenth century and in the seventeenth century was built the chapel of the Tabernacle. During the eighteenth century it was reformed both the façade and towers, giving the building a Baroque appearance. This reform affected the main facade was built by King Ferdinand III and had two twin Gothic towers. The towers of the facade along with two other towers cathedral had disappeared during a fire, what gave rise to new reform, who it was born in the year 1720 by Juan Perez and newly reconstructed in 1723 under the direction of Luis Arteaga.

In the twentieth century as a result of damage to the facade, a sinking tower bells in 1902 by lightning strikes, He proceeded to its reconstruction in the year 1910, what is your current appearance, Neo-Gothic style facade work of Vicente Lampérez. Its current appearance confirms that it was left unfinished. In the highest part we find an image of San Julián that curiously is the only image that exists on the entire facade.

With the history of the Cathedral, next to her, there is a restaurant specialized in grilled meats and top quality dishes such as Scorching restaurant The Secret of La Catedral that has a privileged location with a terrace overlooking the Cathedral of Cuenca. 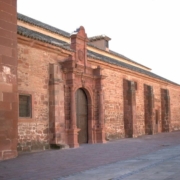 BurningOnline Training Week for Restaurants
Scroll to top
This site uses cookies to improve your experience. If you continue browsing we understand you accept its useTo accept Plus
Use of cookies