For Alcalá de Henares, Miguel de Cervantes has been very important during past and present. In 1547 He was born in a house number two street from image, Miguel de Cervantes. Despite that four years, the writer He left the city, the relationship with it has always been strong and deep. Thanks to the ingenious research chronicler M. Vicente Sanchez Moltó It showed that the birth of Cervantes in Alcalá was no coincidence and it is why we say Alcala de Henares is talking about culture.

So much so that the house where the writer lived has become a museum in his honor and long career that has led to enormous prestige city cultural. Casa Natal Museum is a building that reconstructs the building where, According to studies by historian Luis Marin Astrana,born writer Miguel de Cervantes. It is situated on the High Street, next to the Hospital de Antezana. The present building was built in 1956, evoking the canons of the house Traditional Castilian-toledana.

A city 2.000 years of history, whose origin is in the old Complutum Roman. Walking the streets that gave birth to Miguel de Cervantes, the author the immortal “Don Quijote of La Mancha”, also you discover a spectacular monuments.

But Miguel de Cervantes is, the author of “Don Quijote of La Mancha”, a of the most important works of world literature, who has larger footprint left in Alcala de Henares. You will feel his presence in almost every corner of the city. His memory and his legacy continue today very much alive, not only at home native, now a museum, but also in the cultural agenda location, and other landmarks such as the Teatro Cervantes, where I know is the oldest comedies corral Europe.

A fun way, original and different approach to Alcalá is by Cervantes Train. It works in spring and autumn, part of the station Atocha and, during the journey, a group of actors dressed in period represents fragments of some works of Miguel de Cervantes. The flight attendants on the trip distributed sweets in Alcalá de Henares. After visiting the city with a group of professional guides, It begins the way back to Madrid in same train, where a book of Don Quixote is drawn.

Michael Alcalá de Cervantes mentions in several of his works ("The illustrious mop", "The Colloquium of the dogs"), but especially in "La Galatea", that elapses in the environment of the river Henares. And reminisces a little-known legend complutense Chapter XXIX of the first part of Don Quixote.  Such is the depth of the writer with the city which it has a statue in his honor to remember that it was born the greatest writer in the Spanish language all the time and more international ambassador and author of the second book most widely read literary worldwide.

Alcala de Henares is also a superb restaurant, Scorching Casa Benito, specializing in grilled meats own parenting Anoja both beef and Iberian pork bait field, highlighting its lamb. further, also it features homemade dishes, whether porridge, calluses, White beans, cooked or famous omelette. Dishes that will make you enjoy the best of the local cuisine. In this sense, Ricardo and Marivi brothers offer their good work for more than 40 years. Its friendly service and large room and terrace Restaurant, plus the area tapa, They are a great choice for celebrations, business meals or to enjoy a good grilled meat in Alcala de Henares. Especially, Anoja tenderloin grilled or barbecued beef own upbringing are some of the most popular dishes for diners Madrid. 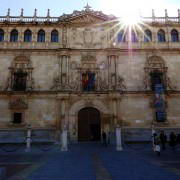 What to see in Alcalá de Henares
0 replies

The best hiking trails to enjoy the valley of Valderredible
Scroll to top
This site uses cookies to improve your experience. If you continue browsing we understand you accept its useTo accept Plus
Use of cookies