It is common to have a visit to the capital on the annual plan agenda. Madrid is life and endless opportunities to make those getaways that you have always dreamed of and see many buildings, parks and museums, among other things, of enormous heritage and cultural value.

The capital of Spain, accumulates many corners in which to lose yourself especially in the city center and then we will summarize the 10 things to see in the center of Madrid. 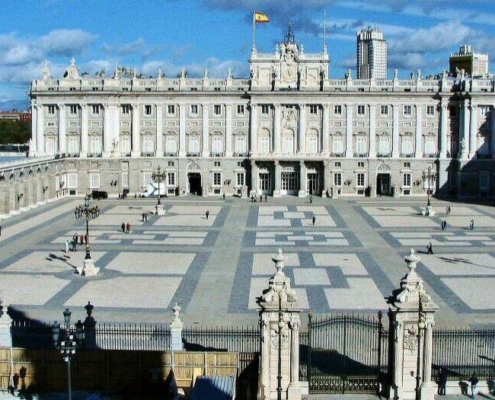 In this list of plans is the Royal Palace. Safety pin. This presidential building is considered one of the most important monuments in Spain since it is the official residence of the King of Spain, although it is not currently inhabited, only used for state ceremonies. It is the largest royal palace in Western Europe and one of the largest in the world. It was built in the 18th century and houses an important historical-artistic heritage. 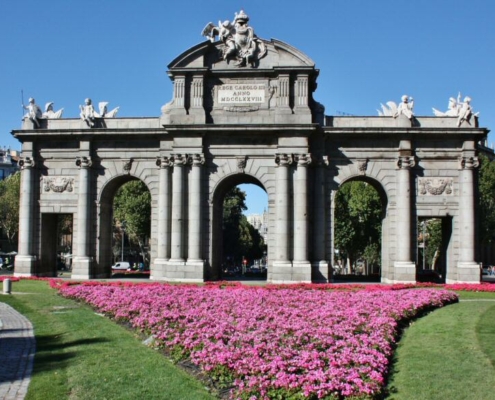 Perhaps it is one of the best known postcards of Madrid due to its history and charismatic image. Definitely, Another of the monuments that you must do is visit the Alcala Gate. Its construction was motivated by the commemoration of the entry of Carlos III in Madrid as King of Spain. The monument replaced another previous door, located a few meters below, that pointed the way to Alcalá de Henares and is located in the roundabout of the Plaza de la Independencia. It is one of the five old royal gates that gave access to the city of Madrid and highlights its three arches adorned with slogans, weapons and flags. 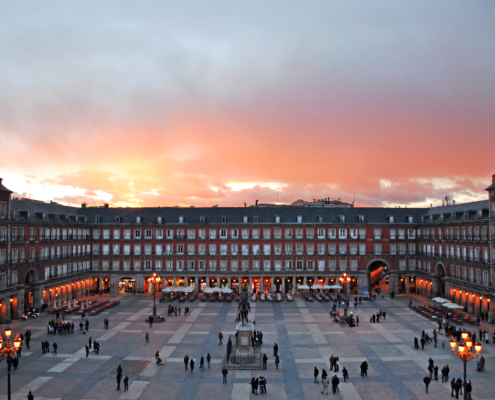 Another common visit is to tour the Main Square. Considered the heart is a place where, go at the time you go, you will always find people. It is a trip to the origin of the city. It is a rectangular and arcaded square, in the purest Castilian style. Several of the most outstanding events of the year are held, like New Year's Eve among other celebrations. One of the most popular aspects is the Sunday morning market, that is installed under its arcaded corridors. Here they buy and sell mainly numismatics and philately items, although also objects of another nature such as old books and magazines, sheets, watches or pens. 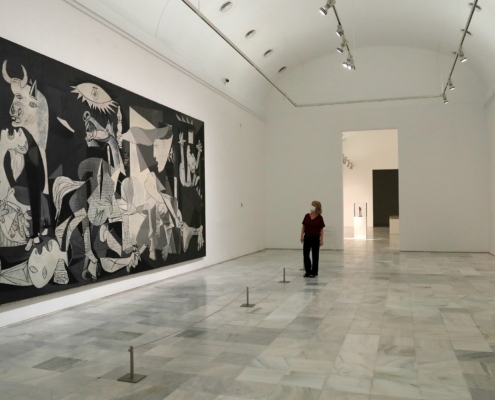 Another museum to consider your visit is the Reina Sofia Museum. Founded in 1992, the Reina Sofía in Madrid continues the times that the Prado Museum does not cover, starting to exhibit works from 1881, year of birth of Pablo Picasso. As a curiosity, the museum is housed in the old San Carlos Hospital, building built at the end of the 18th century. The most well-known painting in the museum is Picasso's Guernica, made in memory of the tragic aerial bombardment of Guernica during the Civil War. 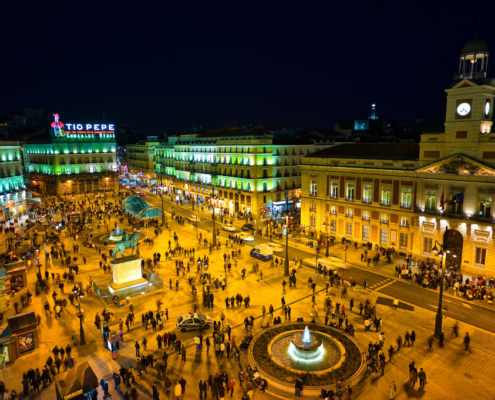 Puerta del Sol is one of the most famous squares in Madrid and the meeting point par excellence for locals and tourists.. It houses some of the most significant points and buildings of the capital, like Kilometer Zero. In Puerta del Sol you will find three well-known places at the national level: The Bear and the Strawberry Tree, the Clock of the Post Office and Kilometer Zero. 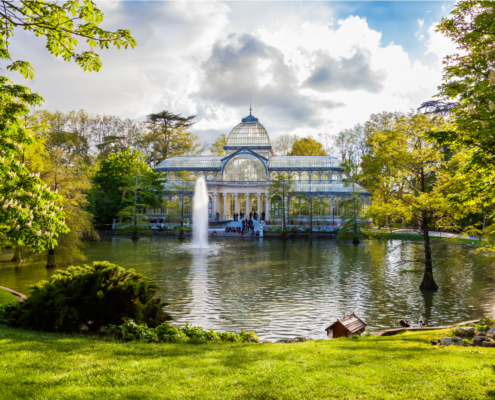 El Retiro is one of the main parks in Madrid and, since its inauguration in 1868, has become a haven of history and peace. Discover what to see in the Parque del Buen Retiro, the lung of Madrid. El Retiro is the most important park in Madrid and one of the favorite places for both locals and tourists. It is a large green space of 118 hectares in the heart of Madrid. 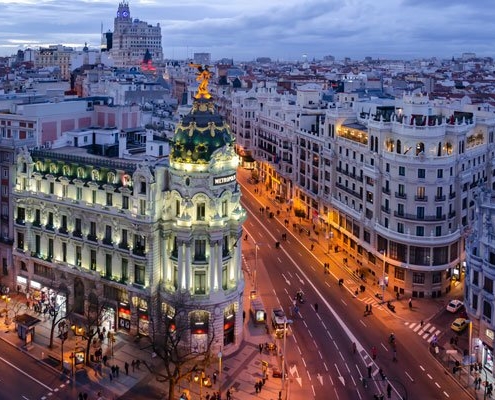 Founded between 1910 Y 1929, Gran Vía is the most famous boulevard in Madrid. It connects the Salamanca and Argüelles neighborhoods and brings together shops, restaurants and some of the capital's most iconic buildings. Gran Vía is the best known street in Madrid. Historically it has received many other names, as Avenida de Russia or Avenida del Quince y Medio. The most important was Avenida de José Antonio, in tribute to José Antonio Primo de Rivera for his victory in the Civil War. Gran Vía is one of the nerve centers of Madrid and in it you can find an atmosphere at any time of the day throughout the year. Some of the most famous buildings on this mythical Madrid street are the Metropolis Building and the Carrión Building, crowned by the famous Schweppes poster that presides over the Plaza del Callao. 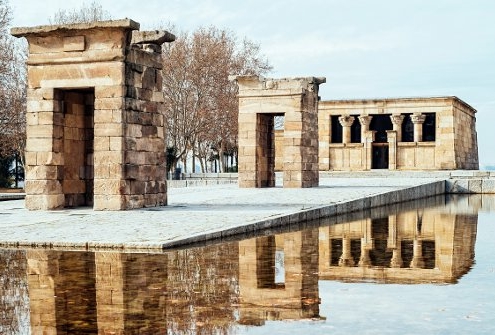 The Temple of Debod it is one of the great treasures that Madrid hides. It is located west of the Plaza de España, next to the Parque del Oeste. The Temple of Debod, originally from ancient Egypt and with 2.200 years of antiguaty, It was a gift from Egypt to Spain for their collaboration in saving the temples of Nubia. The temple is surrounded by gardens and there are many people who take advantage of the place to go for a picnic, practice yoga or relax on the lawn. Our preferred time to visit the Temple of Debod is at sunset, when the sunset dyes the temple of golden colors before the dusk envelops its soft and pleasant lighting. 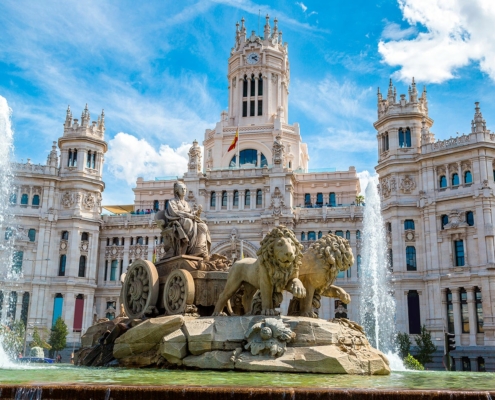 Located in the city center, at the crossroads between Paseo del Prado and Calle Alcalá, Plaza de Cibeles is one of the most representative spaces in Madrid. In this square the most outstanding titles of the Real Madrid football team are celebrated. It is the most famous square in Madrid. It is dominated by a beautiful fountain and flanked by imposing and representative buildings built between the late 18th and early 20th centuries..

Being the capital of Spain, The main cuisines of the whole country and Europe are centered and that is why there are some of the best restaurants in Spain and if there is an interesting one to visit for lunch or dinner, it certainly lies in the experience. Scorching Restaurant Paco Prado where you can enjoy exquisite cuts of self-raised meat, both yearling veal and Iberian field bait pig and is located very close to the Casino de la Reina Park, in Ambassadors street 64. Enjoy your getaway and make the most of this list so you don't forget to visit the most important things in Madrid!! 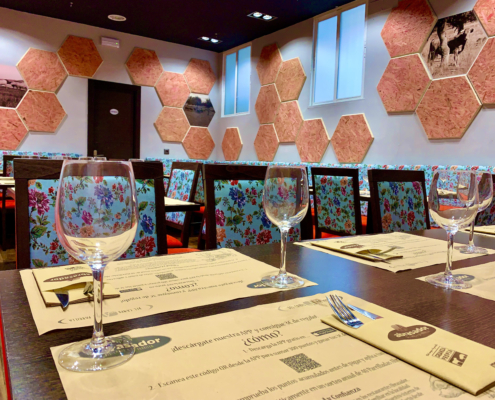 What to see in Pozuelo de Alarcón and surroundings
Scroll to top
This site uses cookies to improve your experience. If you continue browsing we understand you accept its useTo accept Plus
Use of cookies