Don Quixote and mentioned in his first páginna scraps on

History and origin of the name

Don Quixote in the kitchen. Not many dishes can boast of treasuring a story behind them. Scraps on history is tinged with Manchego after the mention of Cervantes in Don Quixote on its front page. This name is born, according theories, in the last edition of this book, Francisco Rico writer notes that duels and losses was a dish that did not break the abstinence from meat selected in the kingdom of Castile was observed Saturday. That is to say, fasts and breaks was a dish that could "break" the ecclesiastical precept of fasting and abstinence that would keep Saturday in the kingdoms of Castile.

However, Other theories claim that this dish served for the offering was discovered on Saturday that did not comply with the law. Some believe that losses in this case refers rather to the "broken bones" animal, since no meat was eaten, but only the giblets or brains.

His recipe is to prepare a scrambled eggs with chorizo, ham and bacon. There is also the option of adding lamb brains. A dish can brighten up any duelist, and repair all broken, in any corner of Castilla-La Mancha.

Its preparation is simple, Products being used a simple farmer's house available. The recipe is not clearly defined, but the basic ingredients are always the final result. The dish is served hot and is often accompanied well with any wine from the region. Some authors have to simply call "eggs with bacon". In Portuguese cuisine there is a dish prepared similarly and called Omolete of Mioleira. 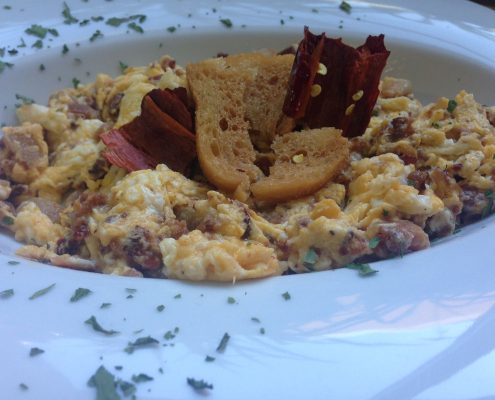 stain dish that can be found in the Scorching de Almagro

Cut the bacon and sausage very finite pieces. Fry all together in a pan. Beat eggs and add to mixture, taking advantage of the own drippings, curdling until simmering.

Serve in a clay pot.

In the following link you can find many more Manchego dishes and of course “Duels and losses”. All of this can be found at Scorching restaurant Almagro.

Toledo at night transforms into magic
Scroll to top
This site uses cookies to improve your experience. If you continue browsing we understand you accept its useTo accept Plus
Use of cookies
Necessary Always Enabled